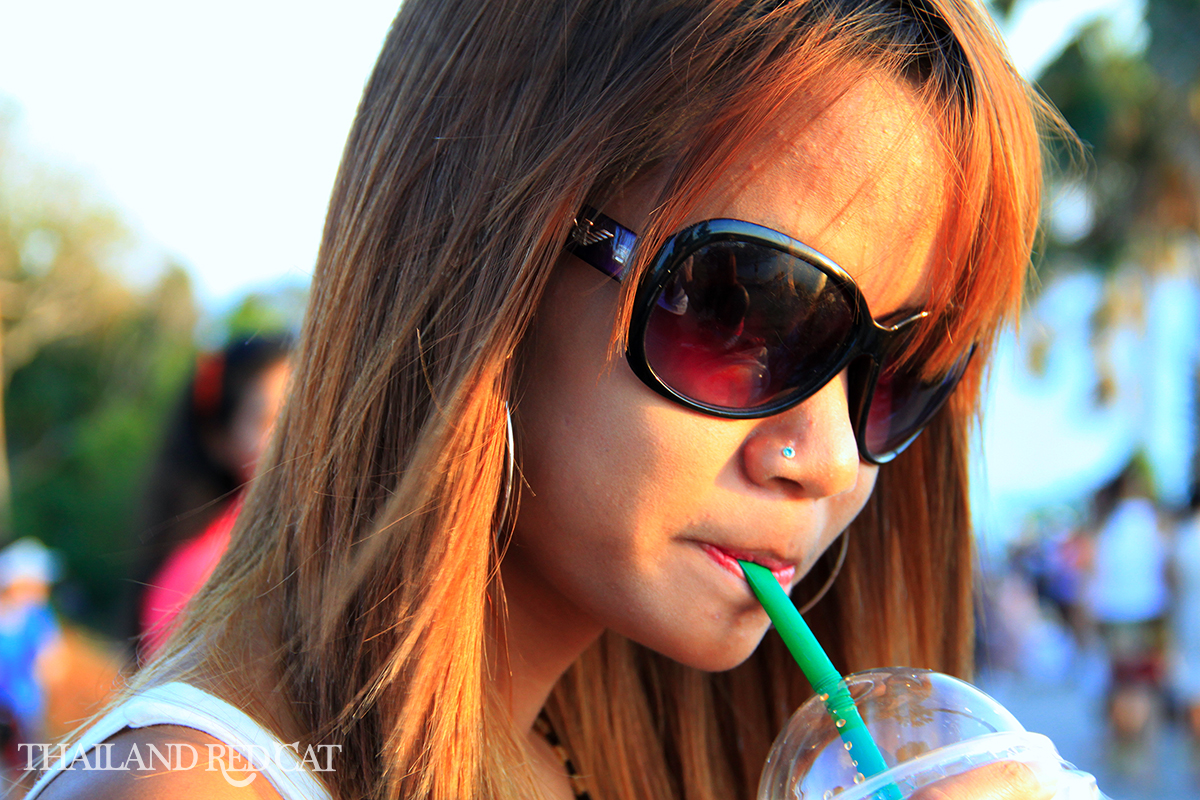 Most people discover this site by searching for all sorts of topics related to Thailand on google. But from what I see in my site stats is that the majority of first time visitors are typing in phrases like “what do thai girls think”, “farang and thai woman” or “sex with thai girl”. And even though I don’t have a specific article to each and every single search phrase out there, a lot of you guys then hit up one of the most read posts on Thailand Redcat: Are Thai Girls all about money?

What I’m basically saying in this piece is that not all Thai girls are about money. While this is just half of the truth and a somewhat general statement as well, what I really meant to say there is: You can have a hell lot of fun here in Thailand and meet and sleep with beautiful Thai women over and over again without paying much money. You might even find your girl paying the bills in the cinema, restaurant or for the taxi back to her place.

That’s especially true if you’re dating women who are around your age or older. You should always be aware that age matters a lot in Thailand, and the fact that the words “pîi” (พี่) for older person and “nɔ́ɔng” (น้อง) for younger person always replace the actual name of someone you don’t know yet. It’s not just that the older siblings are the main caretaker in the family both for the parents and also for the younger brothers and sisters – but this also applies to relationships where the man is usually older than the woman.

One side note before we get into the interesting part: Of course we are talking about “normal Thai women” here, means girls with day jobs, office girls and students. If you fall in love with any sort of bar girl, you’re paying 98% of all bills from day one with the exception being the 8 Baht a person for the non-airconditioned bus ticket in Bangkok (supposing she’s cool with hopping on one) and the rare occasions she walks to the 7-Eleven by herself and doesn’t ask you for a couple of notes to get her daily supply of snacks and toiletries.

Anyway, thanks for still reading. Maybe I have lost a few of you guys already after these first paragraphs as I basically made two completely contradictory statements. First I said you can have fun with Thai women for free and then claiming that since age matters a lot in Thai society and men are usually looking after younger women (and vice versa) it’s us guys who pay most of the time. So how does that even make sense? Let me start by saying:

The longer you are dating a Thai woman, the more you take on your role as the caretaker in the relationship.

And yes, by caretaker I mean the financial caretaker in the relationship. It’s really as easy as that. Thai women simply still don’t have the ambition and chance to earn more money than the guys or make career in one of the big companies (with very few exceptions). Yes they can earn some good money by working as pretties and hostesses at events and do model jobs here and there or sell beauty products on facebook as long as they’re young and gifted. But they know that if they want to keep their current lifestyle they need to find a guy who takes care of them once they passed their 20s.

Maybe a few of you guys now think, hey I know some chicks who work as real estate agents and are doing really good. But then ask yourself how many of them are older than say 35? Yes, there are always exceptions, but I bet you don’t know many who are over 35 and make more money than their husband, no matter whether Thai or Farang.

In that regards, I would compare the situation in Thailand with the one in western countries some 50 years ago when it was the man who worked full time and the woman taking care of the household and children at home. I tell you this is still the case in my own home in Germany where my dad always supported our family financially while my mom prepared the meals, did the laundry, cleaned up the house and was always around when me or my sister needed her (while still working part time).

Taking Care of your Thai Woman

And yes, this is exactly how it works in Thailand. Some guys ask their Thai women to still take up a job or buy her a small business like a coffee shop to keep her busy, while others just want to have her around all the time and give her some pocket money every other day or on a monthly basis which is called “ngǝn dʉan” (money month, เงินเดือน) and yes that’s exactly the same word as the salary for employees.

If you are ever thinking about marrying a Thai woman then what you should be aware of is that you are not marrying only one person but a whole family and are supposed to take part in all sorts of social gatherings, but also the moment you are asking her parents for permission to marry her you need to promise them to take care (in Thai “duu lɛɛ”, ดูแล) of her always. In many cases they even want to have a look at your bank statements (“book bank”) to check on your savings and regular income.

And there’s more to the marrying part: Ever heard of Sin Sod (sǐn sɔ̀ɔt, สินสอด)? That’s the amount of money you need to pay your future wife’s parents in addition to promising of taking care of her, and it’s not uncommon that you’re looking at a 6-figure Baht number here as a form of expressing your gratefulness to the family. Okay, I think we shouldn’t go in too much detail here, the whole marriage topic really deserves its own article.

So now that we’ve talked quite a bit about the money aspect and sure, that’s what most people are interested in anyway, but let’s have a look at some other things to find more answers to the initial question what Thai women are really like.

I remember during my working holiday in Australia and not even planning on visiting Thailand at that time an Irish work colleague told me “man you must go there, you can sit in a bar and the chicks come over talking to you without you doing anything!”. By now I know that by “bars” he meant beer bars and by “girls” working girls or to be more precise prostitutes since in the regular bars it’s still the man who is supposed to do the first step.

Generally, not always. You can still be flirting (in Thai “jìip”, จีบ) with the girl at the coffee shop without you actually knowing it. It’s just so much easier to get in touch with the women here in everyday situations than it is back home and yes, if she likes you she might also ask you first for your line or facebook contact, but if you’re out in the bars and clubs it’s still the men who make the first move.

The headline of this section could more appropriately be called “Why are Thai Women lying so much and easily?”. Because no one really doubts that the girls here like to lie in every other situation, sometimes without even having a reason for it.

Just a few days ago I told my girlfriend “hey, I didn’t know Jum (her friend) is single again. She said her guy had too many giks.” She laughed and said “no, she was just joking, they’re still together. He just picked her up from the shop last evening after work.” Then she explained me that if you have a conversation with a Thai (no matter whether male or female) and it’s not work-related, you can believe like 50% of what she or he says.

Why did she lie about that? I think it’s because Thai people like everything that is associated with the verb “to play”: gin lên (eat for fun, snacking), dǝǝn lên (walk for pleasure), nâng lên (hanging out) and in this case the girl was pûut lên (พูดเล่น) – speaking for fun. Doesn’t really make sense does it, but I don’t have a more appropriate translation for this term, probably because that behavior is just not common in the western world and when someone does just that we would call it lying for no reason.

This article is getting quite long already and I still want to talk about a couple of other things so let’s finish this part with a short list of the most common reasons why Thai girls are lying to Farangs:

What do Thai Women Think?

That’s a good question. I don’t want to do the mind reader here but one thing is certain: Thai Women think a lot and all the time. Even when dancing in the club or while having sex, most of the time they’re unable of really living in the moment. A few days ago I was lying on the bed with my girlfriend watching an animal series and five seconds after she admired the penguins she was like “oh, I think the work schedule for next week is out” (she works rotating shifts at a coffee shop).

I know this may not sound like the common belief of most westerners that Asians and especially Thai people enjoy their life how it is and don’t worry too much about problems or what might happen in the future, but in my opinion they do think and worry a lot more than we do. The difference is they just don’t talk about it all the time. And if they do then it’s usually their best female friend (“sister”) that they talk about how they really feel instead of their boyfriends.

This brings us to the final point of this piece. And what I just explained should answer that question quite easily. Yes, it doesn’t take a lot of dates with a Thai girl to sleep with her but it will take a lot more than a few days, weeks or months until she really wants to talk with you as her boyfriend about what she really thinks and feels like.

I wouldn’t even say that’s negative, imagine it is the other way around like with our western women who pour out their heart relatively quickly and tell you all sorts of stuff you don’t even care about when she just wouldn’t “feel comfortable” to have sex with you for weeks.

I hope by now you have a better understanding of what Thai women are like, but let me also say that the best learning and understanding comes always from spending a significant amount of time in Thailand and making your own experiences.