One of Isaan’s best kept secrets? No doubts about that. You will be surprised by how much Roi Et has to offer after sunset. At least this is what I felt when I came here last week and found there is more nightlife than in more famous provinces in the region like Surin. So don’t make the mistake and come just for two or three nights or you will leave with regrets missing out on that other hostess bar, night club or simply just found out how many of those small special massage salons there are that you first didn’t even notice.

The Thai word for nightlife is “tîao glaang kʉʉn” (เที่ยวกลางคืน) which literally translates as “trip in the middle of the night”. And this expression is nowhere as appropriate as it is in the provinces where people go out late at night, so it’s no different in Roi Et when you drive through mostly dead empty streets after 8pm and the contrast are the nightlife spots where the locals party to loud music, dance and drink until they can’t stand anymore.

One last thing I feel is important to mention before I get into the descriptions, for you to get some orientation: As you can see on the map after the categories like night clubs, outdoor bars, karaoke bars and massage parlors in Roiet – the majority, like 80% of all these places are located on the northern part of town. To be more precise: Right at the northern end of the square-shaped canal in the area around the Mai Thai Hotel and Petcharat Garden Hotel.

It’s quite popular for the local Thais to start the evening by dining and drinking beer in their group before going to the club. As a result, you see that most night clubs (see below) have an open air bar right next to it – different name, same owner.

The most popular such outdoor bar in Roi Et is Suki Lao (สุกี้ลาว) in front of the Rong Beer Pavilion. Well, it’s more like a restaurant but it has a live band, huge screen showing live sports (if you want to watch English Premier League games that’s the place to go) and there’s alcohol on most tables of the locals who are preferably eating Thai barbecue or the typical five or more different types of Isaan dishes they share with each other. A big Leo beer costs 80 Baht here.

Many more local bars can be found along the main road (Pattamanon Road) and the newest and most modern one is the Buddy Pub & Bistro (same owner as Boozer, the nightclub next to it), which, of course, also has a great live band, and strong cocktails. There are also very attractive hostesses that happily sit and chat with you if you share your drinks with them (charge per girl: 120 Baht). They do serve food, too, and that’s what you see a lot of guys doing: Eating and drinking before going to the club.

For the same reason as there are extremely few foreign tourists and expats in Roi Et, there are also just a few foreign owned bars in town. The biggest and most popular one is the White Elephant, a German owned restaurant and the best place in Roi Et to meet and chat with other foreigners. Delicious German food and beer (Hofbräu), a free pool table, flat screen TV’s with live sport and nice people make it very worthwhile to visit. Update: White Elephant is currently closed.

A couple of more foreign bars and restaurants like an Italian Pizzeria and Koran BBQ can be found on the western side of the beautiful pond. Look at the map below for the exact locations. 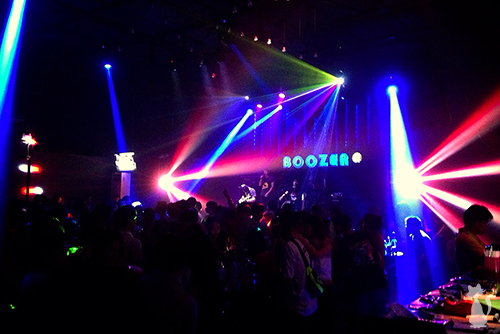 The most popular night club in Roi Et is Boozer. If the locals ask you in the morning what you were up to, it’s not uncommon for them to say “You went to Boozer last night mai?” Great live band there that makes everyone dance and sing and what surprised me is the music isn’t too loud and deafening like it’s the case in most Thai nightclubs. They also got pretty hot and white skinned hostesses all over the place that you can buy shots for 100 Baht each. Bottle prices are more than reasonably priced too: Regency 680 Baht, Red Label 1,100 Baht and Black Label 1,800 Baht. 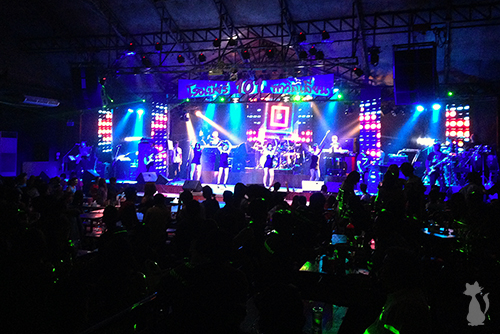 Rong Beer Pavilion is the other hugely popular party place in Roiet for locals and expats (not that there were many) of all ages. It’s basically a huge hall with a massive stage where skilled local boys and girls perform Isaan folk and Carabao songs while the audience is eating, drinking, dancing, singing and flirting.

They kind of copied the concept of Tawan Daeng with a more modern setting and equipment and so Rong Beer Pavilion is well visited almost every night while the original gets busy mainly on the weekends and during special concerts. 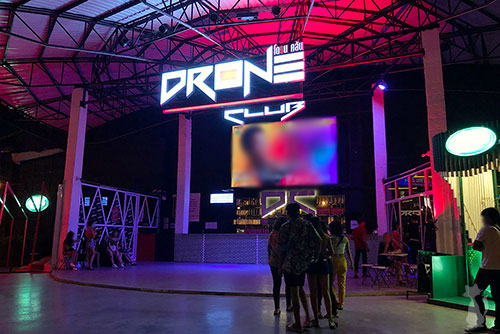 The newest night club in Roi Et is Drone Club 101 near Boozer. Thai style setting with lots of round tables all around, virtually no dance floor in front of the stage – people dance in their groups at the table while sharing a bottle of whiskey. Lots and lots of young and cute local girls here and different to the Thai clubs in Bangkok is that it’s not uncommon here that they’re looking for eye contact and invite you to join their group drinking at their table. 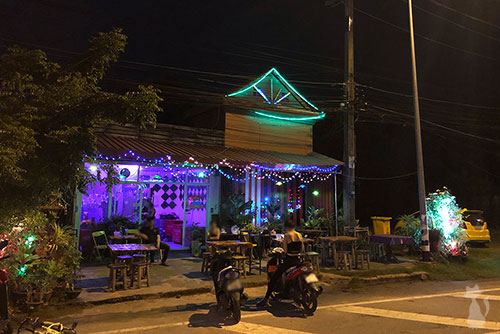 The concept of the karaoke bars is very similar to the hostess bars: You pick a girl or two that you like and invite her to hang out with you while paying for her drinks. However, the karaoke girls tend to be more shy, at least that’s how they behave and it’s you to lead the conversation.

There are plenty of karaoke bars spread all around town. The most authentic and friendly place is right across the street from Boozer with fair and easy prices: 100 Baht for a big beer, 120 Baht per hour for a girl to sit with you and 10 Baht per song you like to sing (not compulsory, you may just sit, relax and enjoy). They’ve also got a few young ladyboys there.

Find the locations of other karaoke bars on the map below.

Roi Et’s infamous soapy massage parlor is located in the Mai Thai Hotel – right entrance of the building, second floor. There is no fishbowl with glass but couches instead and the girls are divided into two categories: Moo (mɔ̌ɔ – หมอ, the Thai word for doctor) which are the standard girls and most of them are older than 30 and moms, too. Their price tag is 1,400 Baht. It’s well worth to spend a little more and pick one of the sideline girls that cost 2,000 Baht and are incredibly hot, white skinned and attractive – they could work for well beyond 3,000 Baht in the massage parlors in Bangkok.

The rooms are rather very basic and kind of like a typical Thai hotel 30 or 40 years ago (that’s how old it must be), there’s a queen bed, small TV that they don’t turn on if you don’t like, but what really sucks is the bath hub which is way too small. Still all in all good value for money here and since it’s the only such massage parlor in town you should definitely give it a try.

You might quite easily oversee a lot of the small massage salons as the girls are not sitting outside as it’s the case in the tourist cities. There are plenty of those spread all around town so just look on the map below. It seems they all agreed to charge the same prices and that’s 300 Baht for a Thai Massage and 500 Baht for an Oil Massage.

It usually depends on the girl if she gives you a happy ending for a tip of 500 Baht (negotiable). 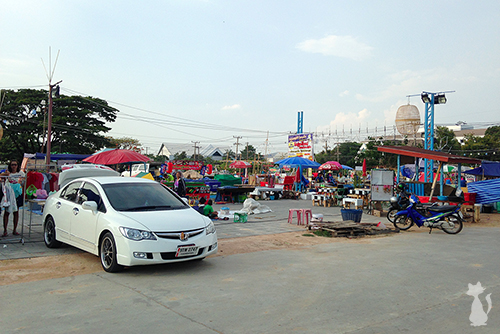 Just to round this post up and that’s what I usually do is to tell you where to find the night market which is always a nice place in the provinces to start your evening with authentic and cheap street food and (if you like) shopping of fashion, handicrafts and all sorts of stuff.

You can find it at the northern end of town across opposite the Petcharat Garden Hotel. The other popular hangout spot for the locals during the late afternoon and evening is at the big pond called Plan Chai in the center of town, every day full of couples, students, runners or guys who finished work and come here for eating snacks and taking a break.

Map of Nightlife in Roi Et

Videos of Nightlife in Roi Et