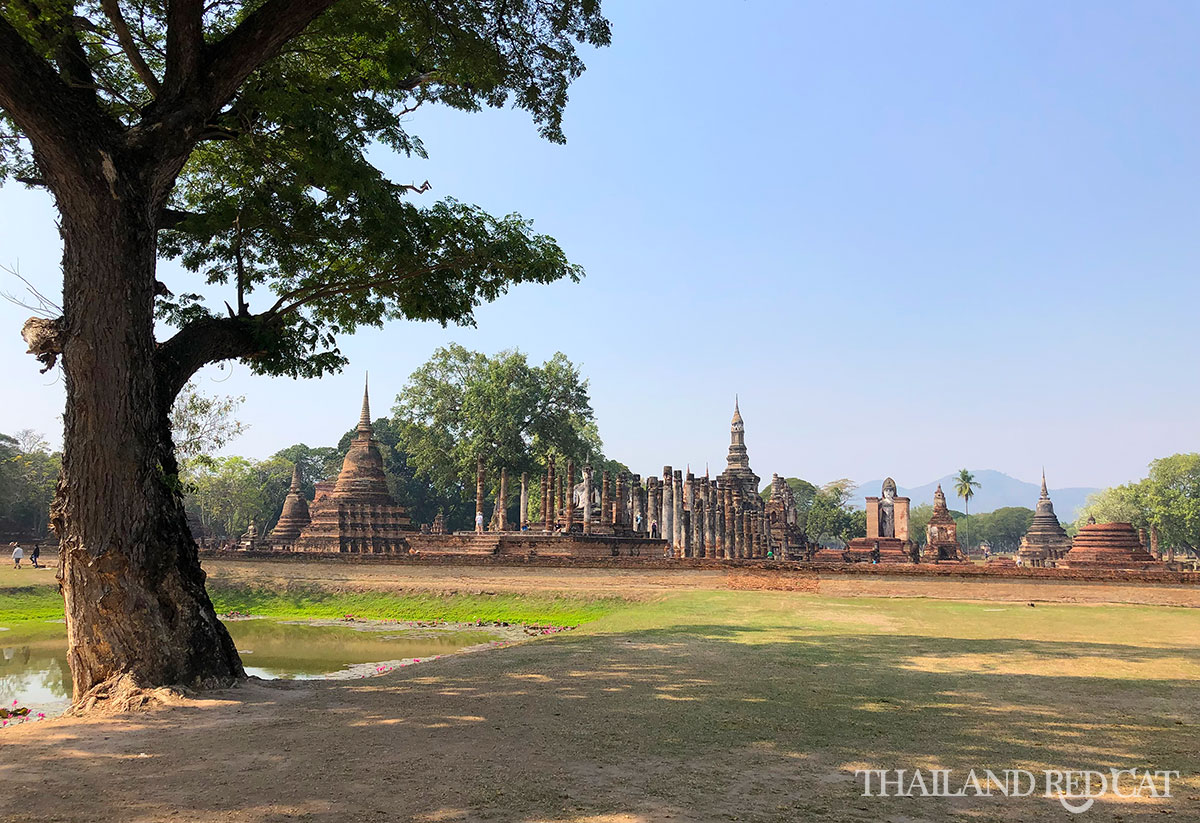 The highlight of my recent historical trip to the lower north of Thailand has definitely been exploring the temple complexes of Sukhothai. From 1238 to 1438 this has been the first capital of Siam (followed by Ayutthaya, Thonburi and Bangkok). The most famous and influential one of its nine kings was King Ramkhamhaeng, the second son of the founder of the state (reign from 1275-1317). He significantly expanded the Siamese empire through his military victories to a territory even bigger than modern Thailand, developed the first Thai script (Siamese alphabet), imposed strict observance to the Buddhist religion and founded a military and social organization which was soon copied by the Khmers.

Today the historic town of Sukhothai and its associated historic towns (Kamphaeng Phet and Si Satchanalai) is one of Thailand’s five UNESCO World heritage sites.

Since the Sukhothai Historical Park is quite extensive (70 sq. km) I decided to take a full day exploring the site by bicycle. Having just arrived in the late afternoon from another historical town called Phitsanulok, I was walking around New Sukhothai, looking for a hotel. Most of the hotels in Sukhothai are located on the eastern side of the Yom River, although quite a few foreign oriented guesthouses and hostels can be found on the small strip right across the bridge on the western side of the river. That’s also where the songthaews to the historic park of the old town leave.

I took it easy on my first evening. I was basically just walking around town, not that exciting New Sukhothai to be honest, the nicest site I spotted was (surprise) the most famous temple of New Sukhothai: Wat Ratchathani (วัดราชธานี). 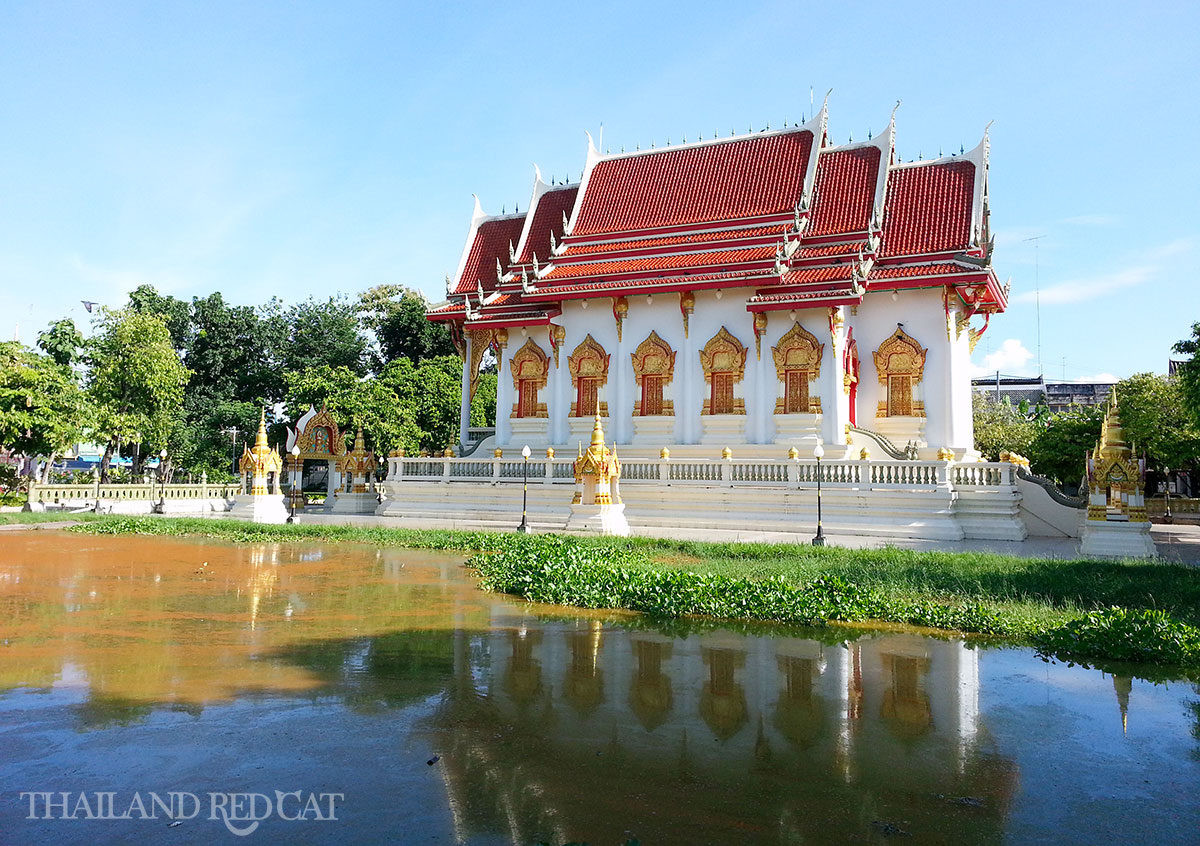 Later in the evening I hooked up with a few Thai guys opposite my hotel (Chinwat Hotel, air-con room 500 Baht per night) who invited me to drink some Thai whiskey with them and a few glasses later and an extended conversation about life and girls in Sukhothai I left, heading out into the nightlife of Sukhothai. 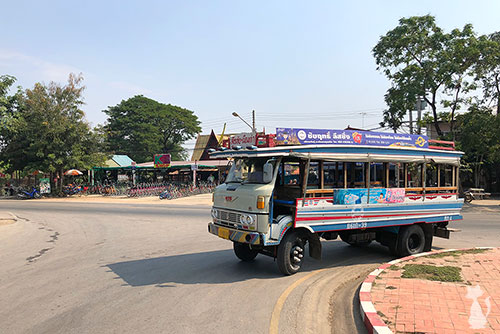 To give you some orientation, below is a map being marked with the songthaew stop in New Sukhothai and the drop off point at the entrance of Sukhothai Historical Park, right in front of the most important central zone where many restaurants, bike rental shops (50 Baht for one day, no ID or deposit required) and the Ramkhamhaeng National Museum (admission: 150 Baht) can be found.

It’s 30 Baht one way with the songthaew (picture), I didn’t experience scams, nor did I hear of any.

Each of them charges 100 Baht for admission, plus 10 Baht per bicycle, 30 Baht per motorcycle and 50 Baht per car. An audio tour can be rented at the ticket booth of the Central Zone for 150 Baht (English, Japanese and Thai). I have been exploring all the three zones by bicycle in one full day and here’s my guide and tips for you.

First, below is a map for some orientation of the three zones of the park, as well as the songthaew stops.

The Central Zone is the main zone of the park and has some of the best preserved and most impressive monuments. Most visitors to Sukhothai only come to visit this zone. 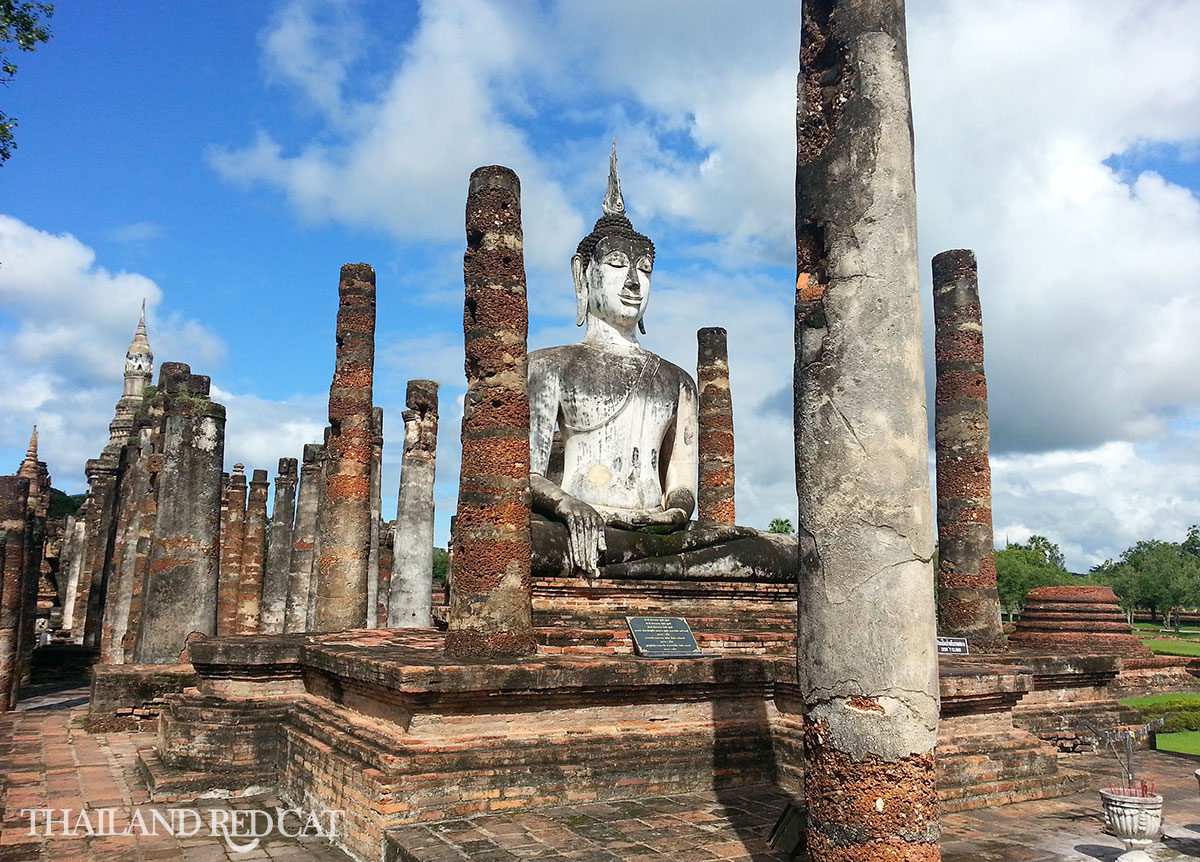 This is without doubt Sukhothai’s most famous and most photographed monument and even if you haven’t visited the park yet, you have probably seen this picture before. Located in the center of Old Sukhothai, Wat Mahathat is not only the largest Wat (206m long and 200m wide), the Buddha images also reflect what is known as the typical Sukhothai style: A flame appears on the top of the head of the Buddha, the hair is a little curled, the face is oval with a downward gaze, a hooked nose, high curving eyebrows and shows a somewhat smiling expression.

It was also during the Sukhothai era when the four postures of the Buddha were created: sitting, reclining, standing and walking. 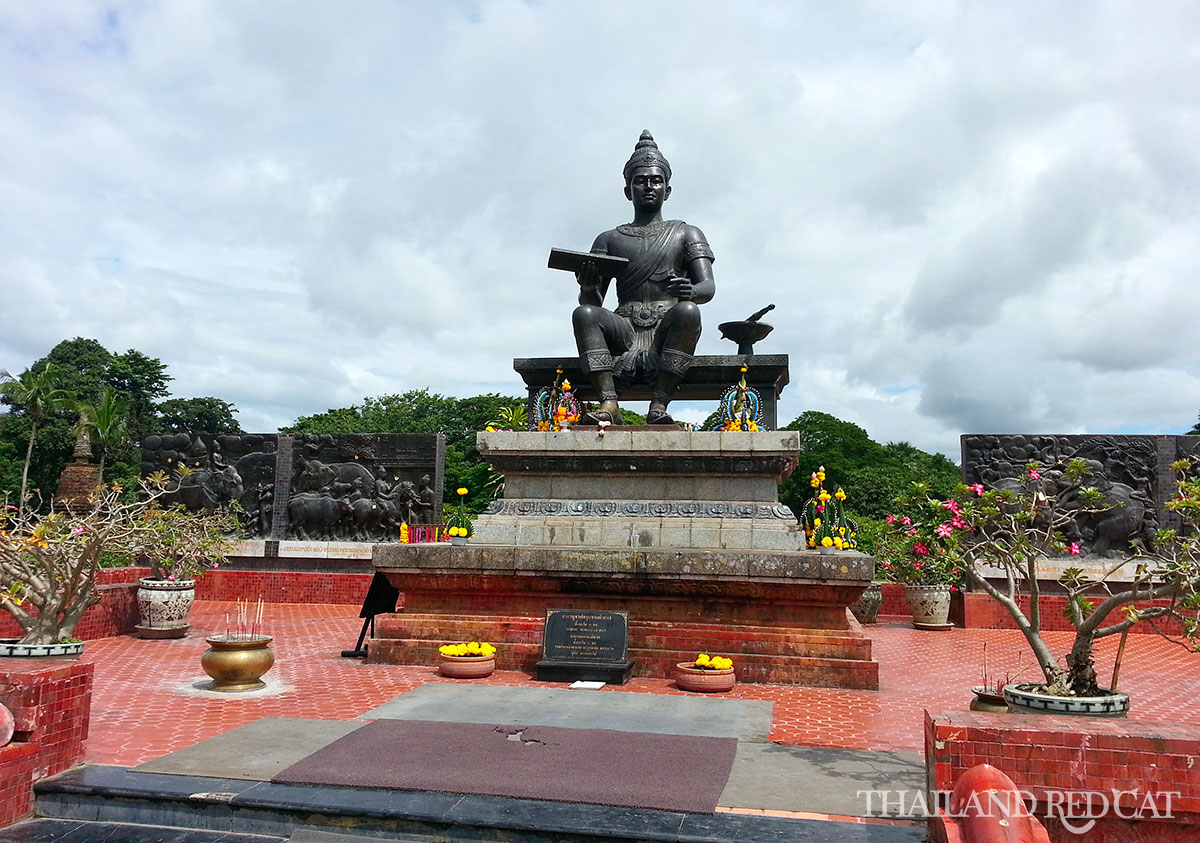 As mentioned in the introduction, Ramkhamhaeng was the most important of all kings during the Sukhothai era and that’s why they built a monument for him within the premises of the park’s Central Zone.

Other highlights of the Central Zone include the Khmer style Wat Si Sawai, Wat Sa Si, a monastery that sits on an island, Wat Trapang Thong, the original site of Thailand’s Loi Krathong Festival and the Ramkhamhaeng National Museum (admission 150 Baht, I gave it a visit though was a bit disappointed when I figured that the Ramkhamhaeng Inscription (the earliest example of Thai handwriting) is only a replica and the original one is kept in the National Museum in Bangkok – and I wasn’t even aware of it when I visited it last year). 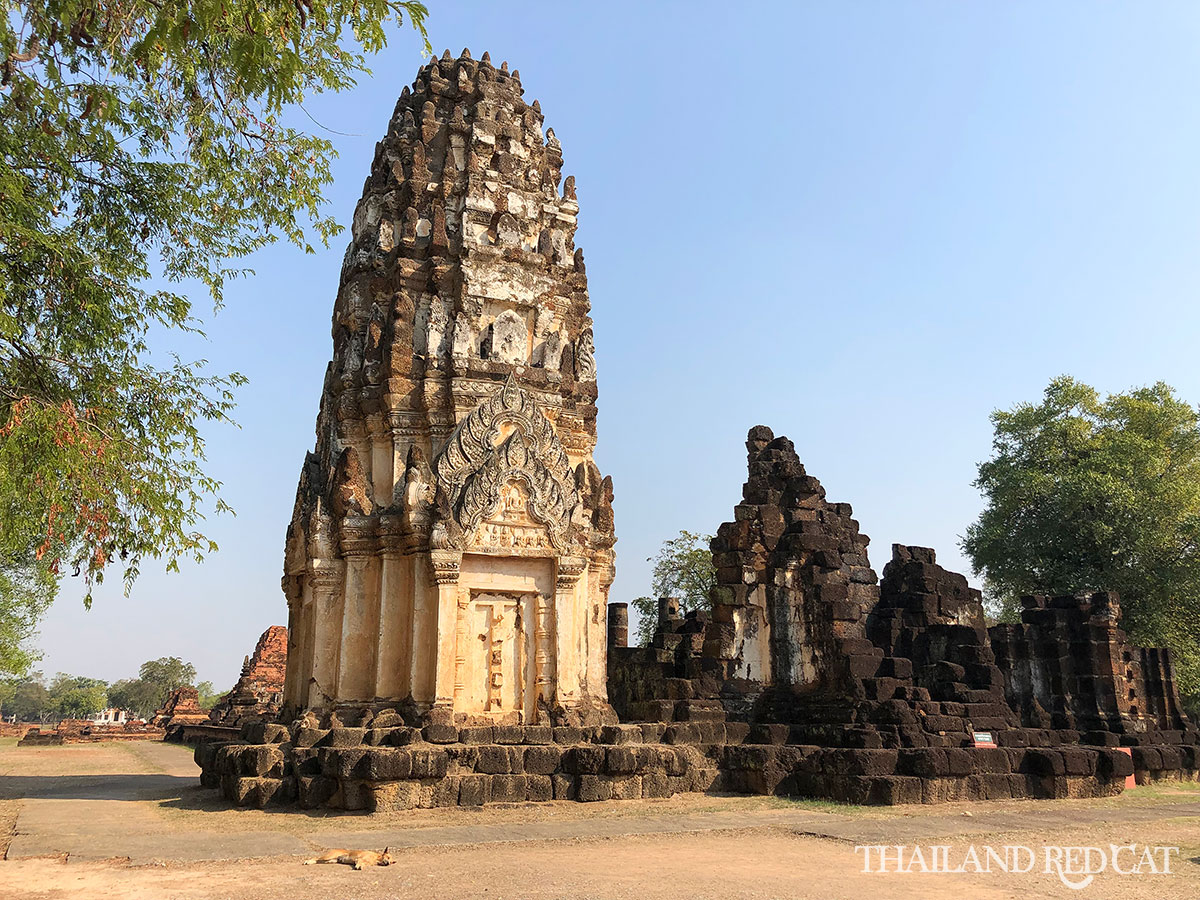 Large parts of Wat Phrapai Luang are destroyed, yet this temple complex is of immense historical significance as it’s said to have been the centre of Sukhothai during the reign of the Khmers of Angkor prior to the 13th century. 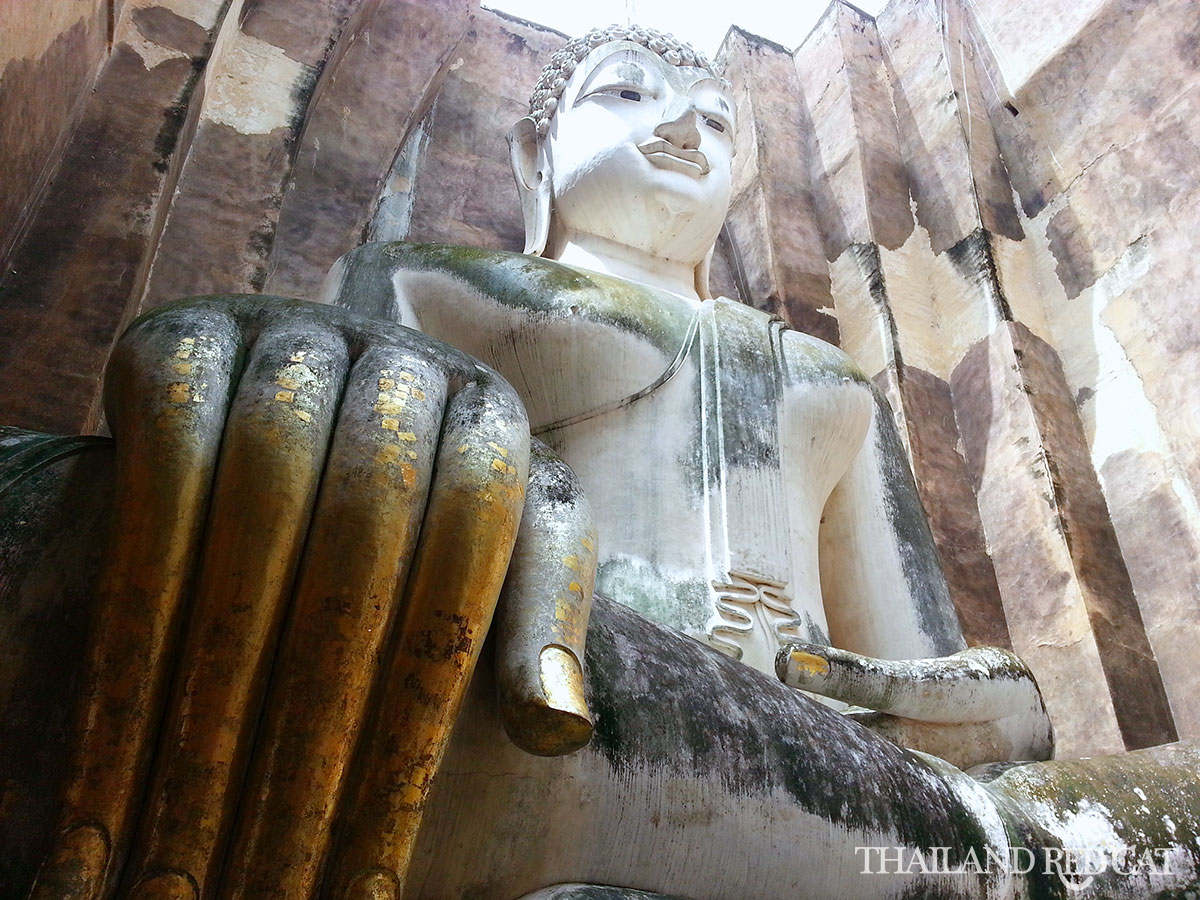 My favorite temple in Sukhothai. Wat Si Chum is said to be the most studied temple in Thailand.

It contains a 11m high stucco Buddha called Phra Achana, meaning “one who is not frightened”. It’s famous for the fingers of its right hand that visitors cover with gold leaves. There is a legend which says that Burmese soldiers who had invaded Sukhothai fled when they saw the image of Phra Achana. Make sure you don’t miss Wat Si Chum out on your trip to Sukhothai like most of the visitors do.

This zone is not just by far the biggest one of the three, it’s also the most remote one, located about 2km west of the old city walls. You definitely need your own vehicle to get there (let alone getting around). It took me about 15-20 mins by bicycle from Wat Si Chum in the Northern Zone to the ticket booth of the Western Zone. 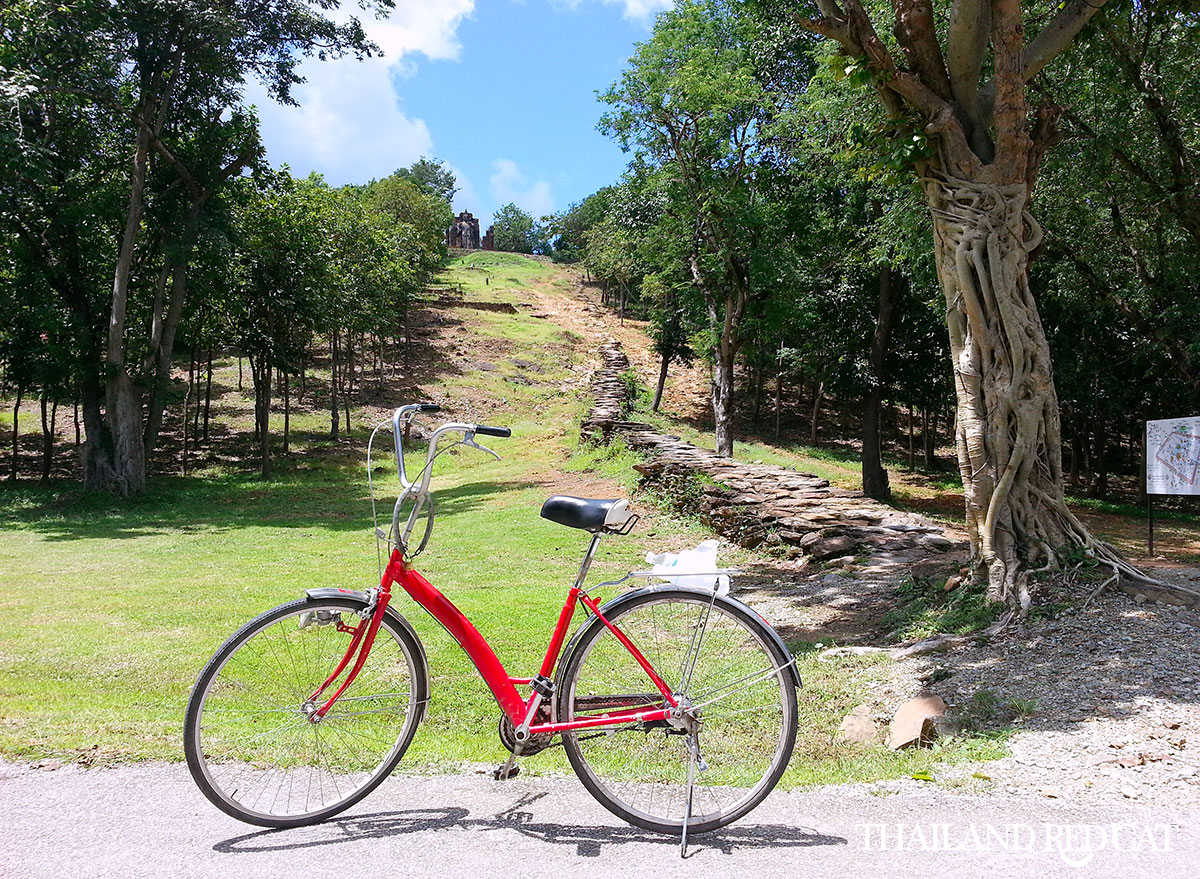 Wat Saphan Hin is the most important temple of the Western Zone, and it’s also the best preserved one.

Located on a hill 200m up from the road (where my bicycle is in the pic), seriously it was quite exhausting making my way up the staircase in the heat after I had been cycling and exploring for hours. The views from the top were rewarding though as well as the beautiful 12.5m-high standing Buddha image surrounded by chedis and a (ruined) wi-hahn as you can also see in my video below.

Apart from Wat Saphan Hin, there are several other temples along the road, though most of them are featureless ruins. I rode my bicycle all the way down to the end of the road past a lot of these small temple ruins and eventually reached the western entrance of the Central Zone.

I haven’t met even one other tourist while cycling around the park’s Western Zone.

That’s my guide for exploring Sukhothai Historical Park! Below is a video, including some of the highlights of my day.

The Sukhothai Historical Park is open daily from 6am to 6pm. Hope this helps planning your trip or even makes you wanna go there at all if you have seen my pictures and the video.