I just came back to Bangkok yesterday from my second trip to the Northeast of Thailand, Isaan. This time the trip was all about Nakhon Ratchasima or as Thais call it in short: Korat. Before I tell you about my experiences there, my highlights and how the nightlife is, here are three really interesting facts about Korat that you may not have known yet:

Even though it’s quite a big city, there are only a handful of attractions really worth mentioning. You can easily check them off within 2-3 days. I strongly recommend you to rent a motorcycle as some places are well out of town. Rental rates are usually 300 Baht per day for a decent scooter. 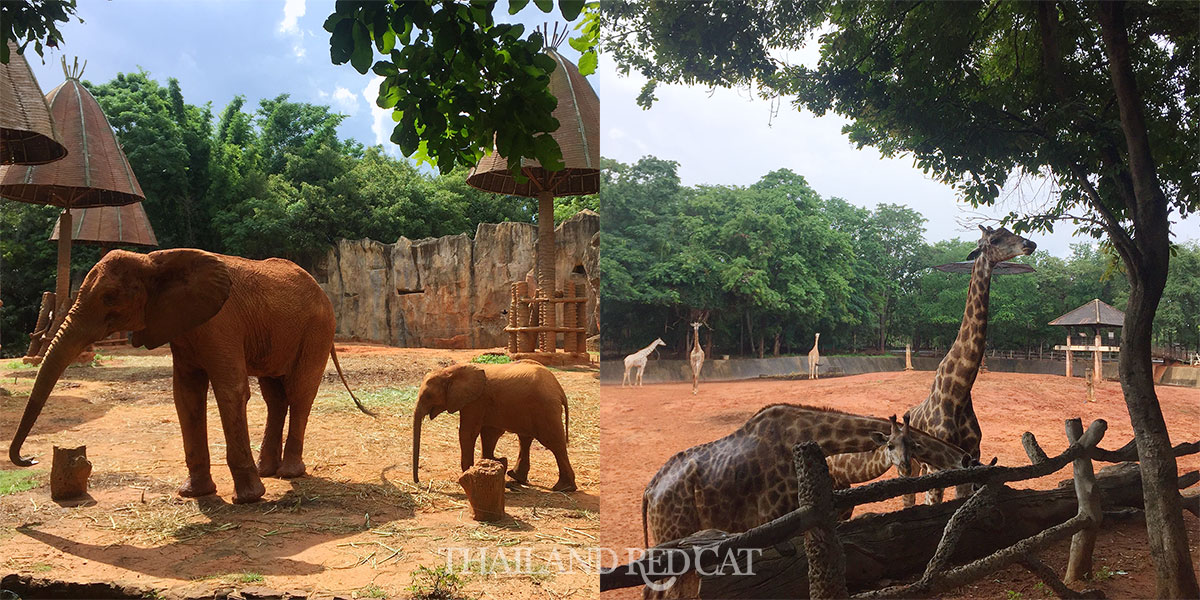 The Nakhon Ratchasima Zoo is the nicest animal park I have seen in Thailand thus far. Yes, it’s better than the Dusit Zoo in Bangkok – much bigger and much, much quieter. In fact the whole areal is so huge that the distances between the different enclosures are too big (and too hot most of the time) to walk. Most people either rent a kind of golf cart, join a tour or like me drive around with their motorcycle. I really enjoyed my afternoon there and they have got some rare animals for Thailand including African Elephants and Giraffes.

In the same areal of the zoo is also a Water Park that makes a nice place to finish your sweaty ride around the park. 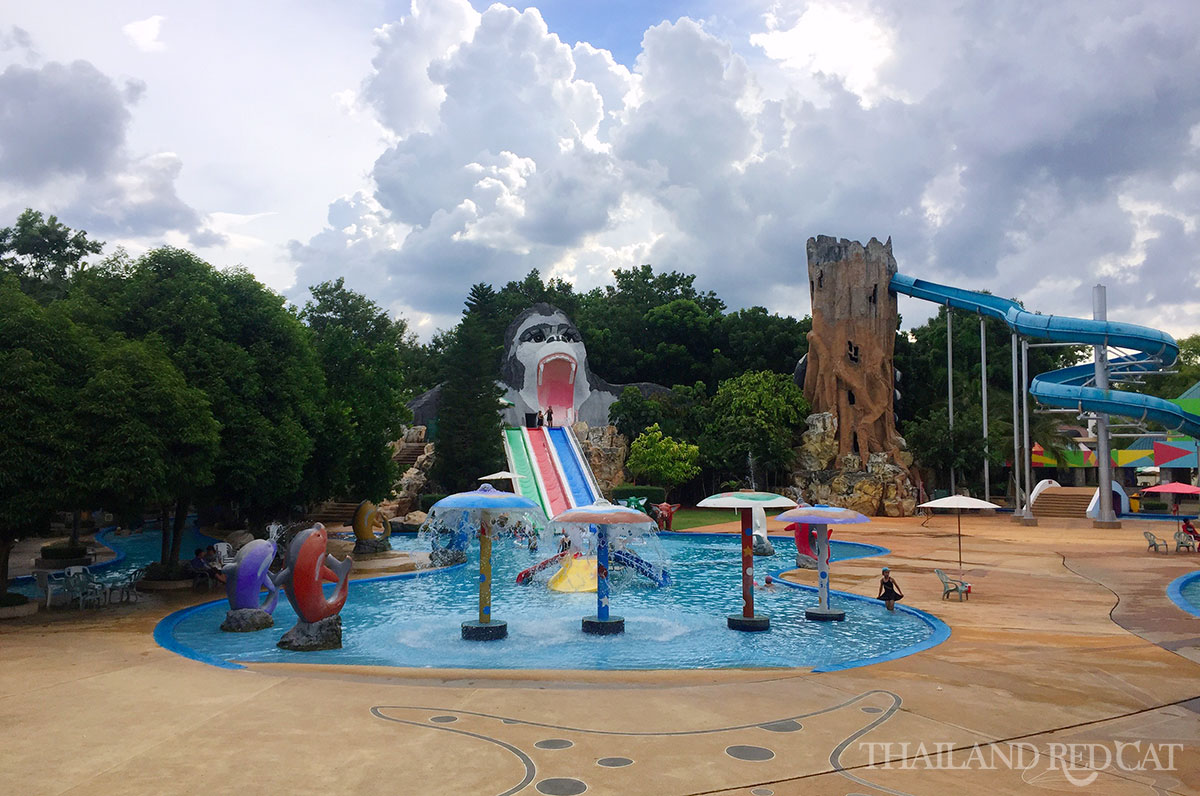 It’s mostly for the kids to be honest but for 20 Baht admission you can’t do any wrong playing in the water for half an hour or so. Swimming suits are available for rent at 60 Baht plus 140 Baht deposit. 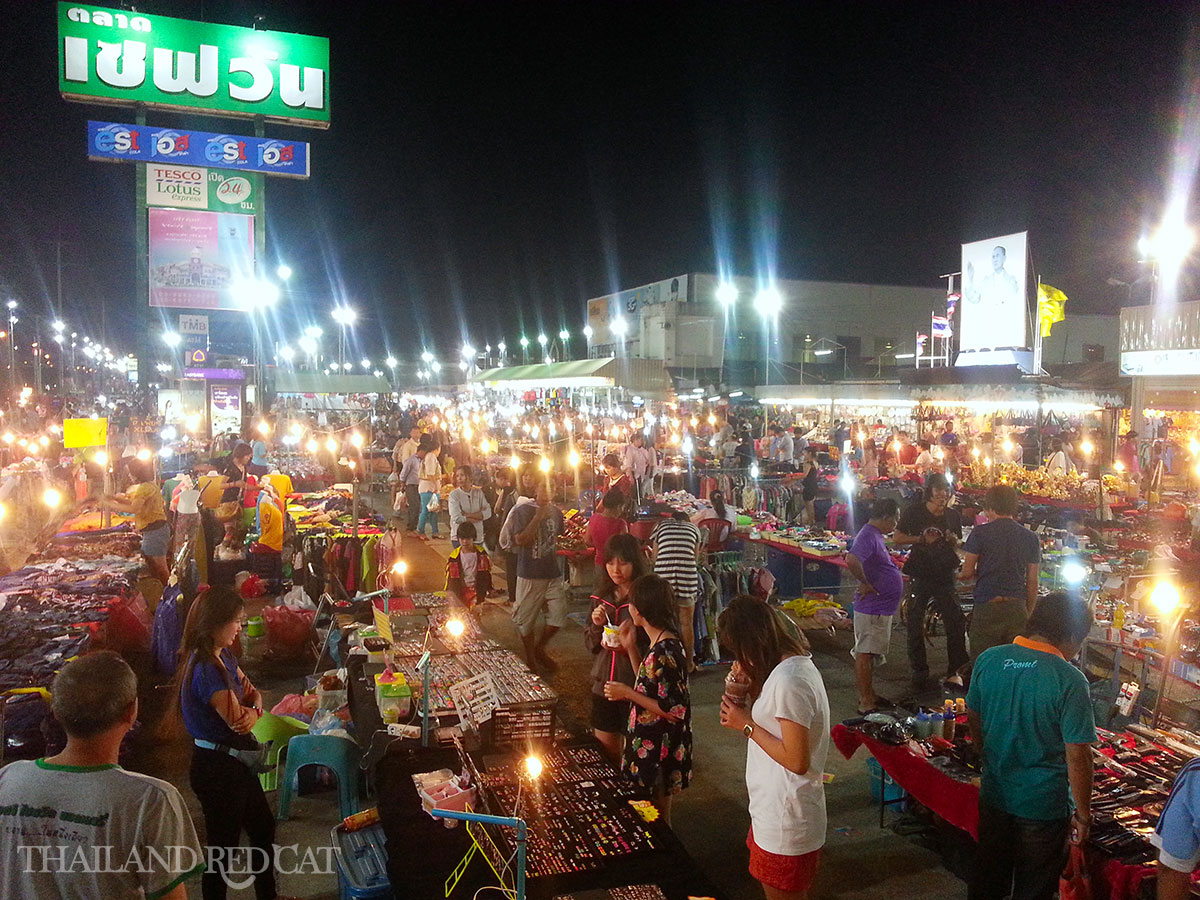 Strolling around the night market is one of the cultural highlights in Korat. It’s huge and they sell anything from satellite receivers to t-shirts that they print the sentence of your choice on them (depending on size only 90-130 Baht). There is also a huge food court and several other small and neat places where you can have dinner, enjoy a cool Leo beer and watch the scene.

To get there, take a songthaew (pick-up van in form of a passenger taxi) from the main road all the way down to the night market. You can’t miss it as the market is right next to the main road (on the left coming from the city). It takes about ten minutes from the mall and the fare is just 8 Baht (no matter from where you go).

There is also the so called night bazar in the old city, see map below. It’s smaller but still fun to visit and perfect for a romantic date and dinner.

The most famous Buddhist festival in town is the Korat Candle Wax Festival, held ever year in mid of July to celebrate the beginning of Buddhist Lent. The highlight are the huge and incredibly detailed sculptures made out of pure wax that are very impressive.

It takes place at the Yamo Statue in front of the old city wall. There’s also a big market around so you can taste some local Korat foods and drinks after admiring the wax sculptures and lovely Isaan girls in traditional dresses. 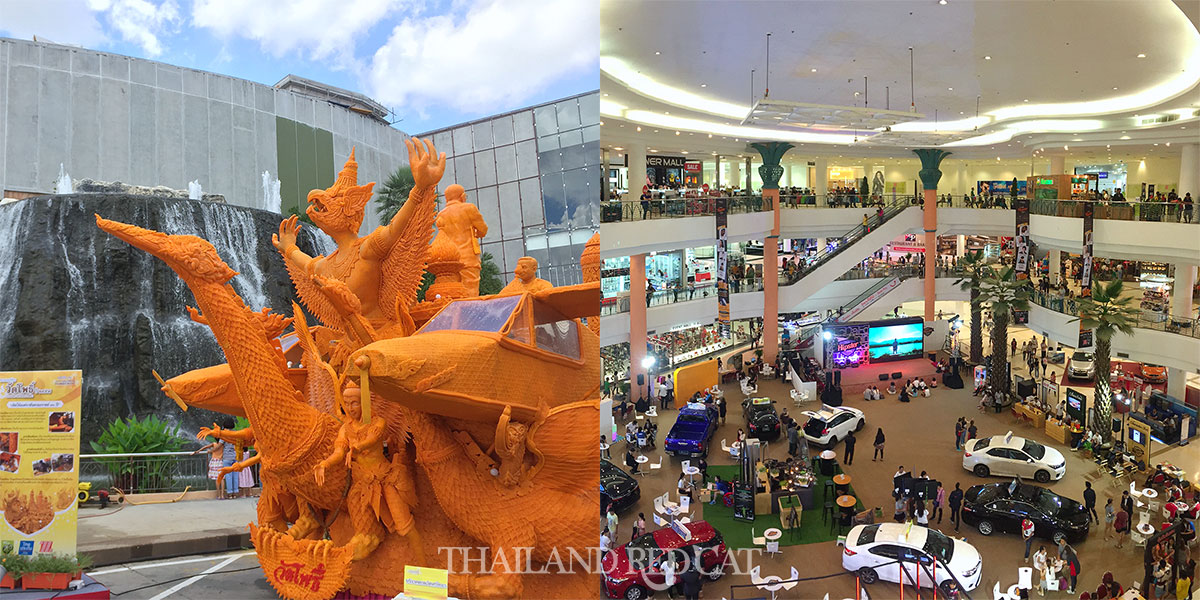 I don’t mention a mall in my highlights of Korat out of shopping reasons – you might have a better and cheaper experience at the night market and you can find shopping malls in any major city in Thailand anyway. However The Mall really seems to be the place that everyone hangs out during the day. It was the first place that I visited in Korat, I just got off the bus there as it’s conveniently located on the main road in the heart of the city.

There was a stage set up in front of the mall with a Thai rock band playing, lots of young people cheering and having a good time. The mall is also a good place to just come to eat, as in most other Thai malls there is a food court where you can get fine local dishes like Khao Kha Moo for just 50 Baht. And there’s a really nice and large swimming pool (50m lanes) outside right next to the food court, entrance fee is 100 Baht for the whole day.

The new star in the lifestyle and shopping category is the Terminal 21 Shopping Mall on the main road opposite of Big C: 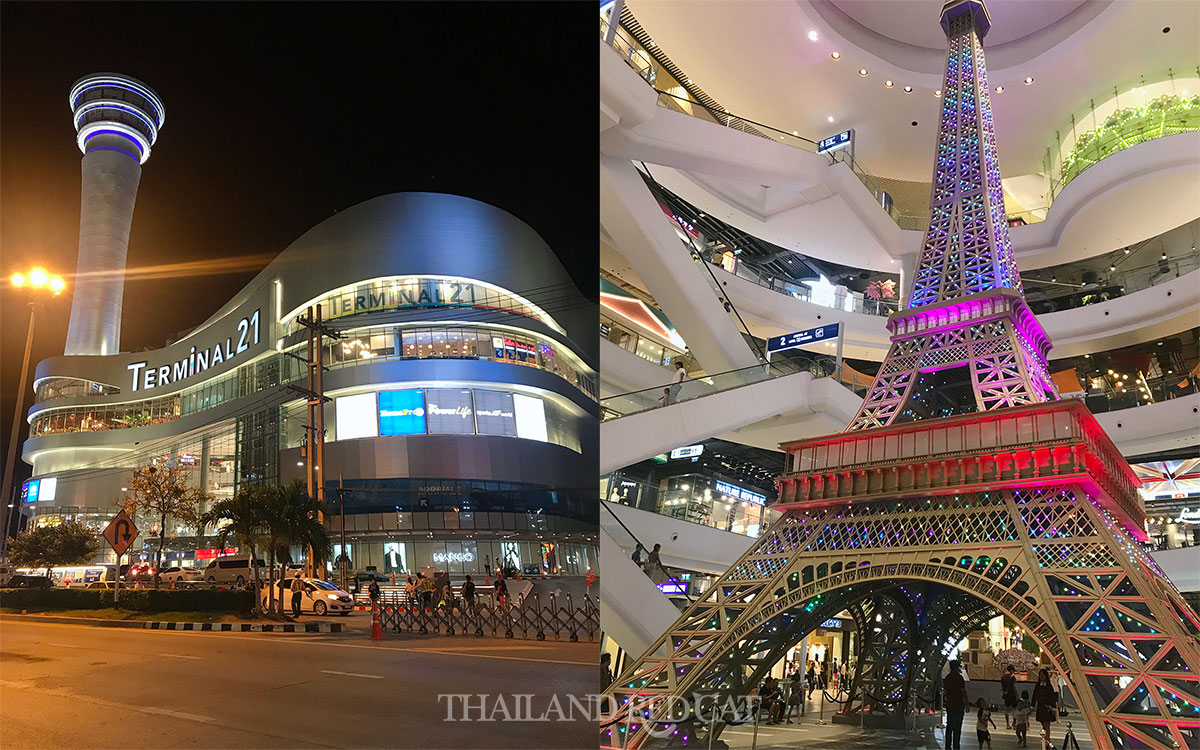 The mall of the same name was opened about 5 years ago in Bangkok and is extremely popular, each floor featuring a different part of the world. Terminal 21 Korat makes the perfect dating spot – watching a movie, eating in the restaurants or just buying some ice cream and strolling around. Fun fact: The mall holds the record of the longest elevator in Thailand.

Make sure to check out the Observation Deck on top of the “Tower” – the best views all over Korat: 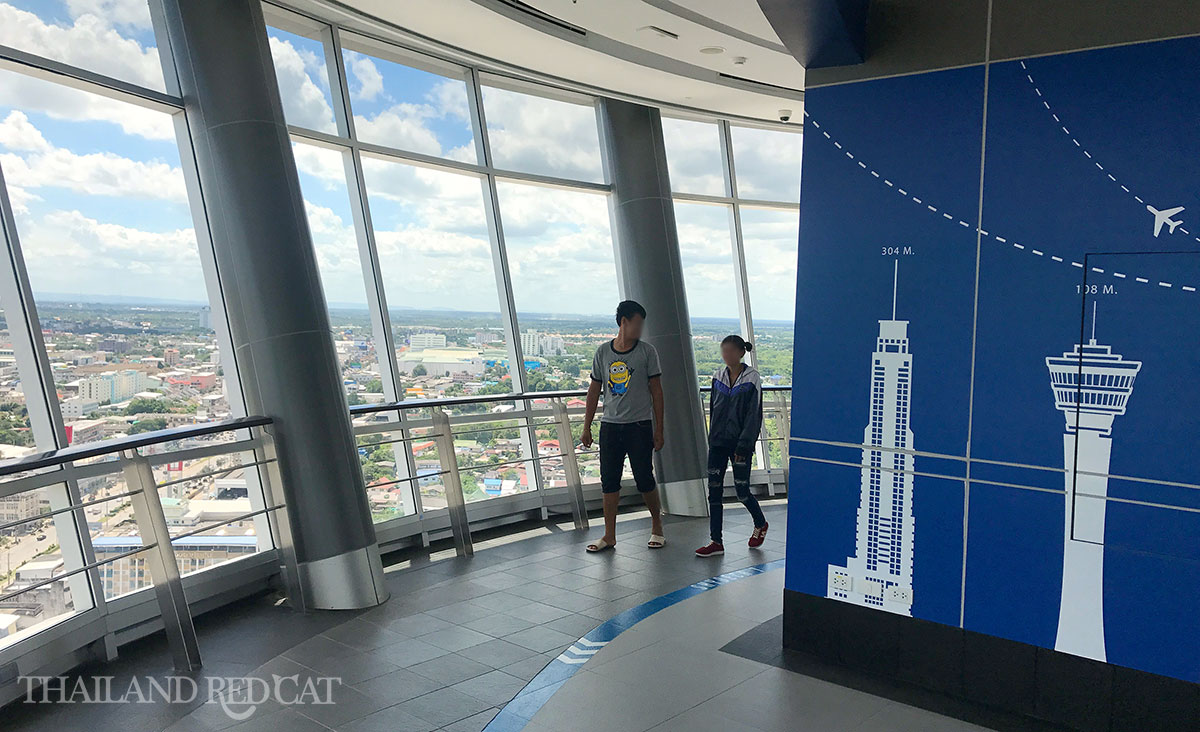 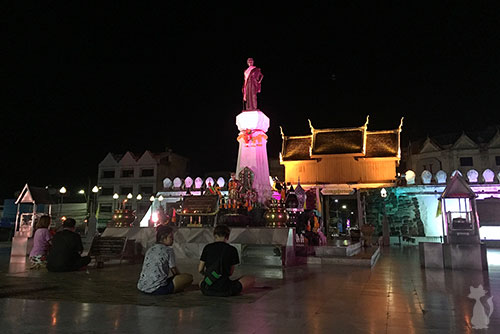 Given that Korat is Thailand’s third biggest city I was surprised how empty and quiet its streets were at most times. So it was fun to just take a walk around the center of town and enjoy the relaxed atmosphere all over the place. I discovered the waterway around the former city gates (now the old town) that make you instantly think of Chiang Mai.

One sight you should not miss here is the Thao Suranari Monument – a revered female hero who defended Siam against the invading Laotian troops. 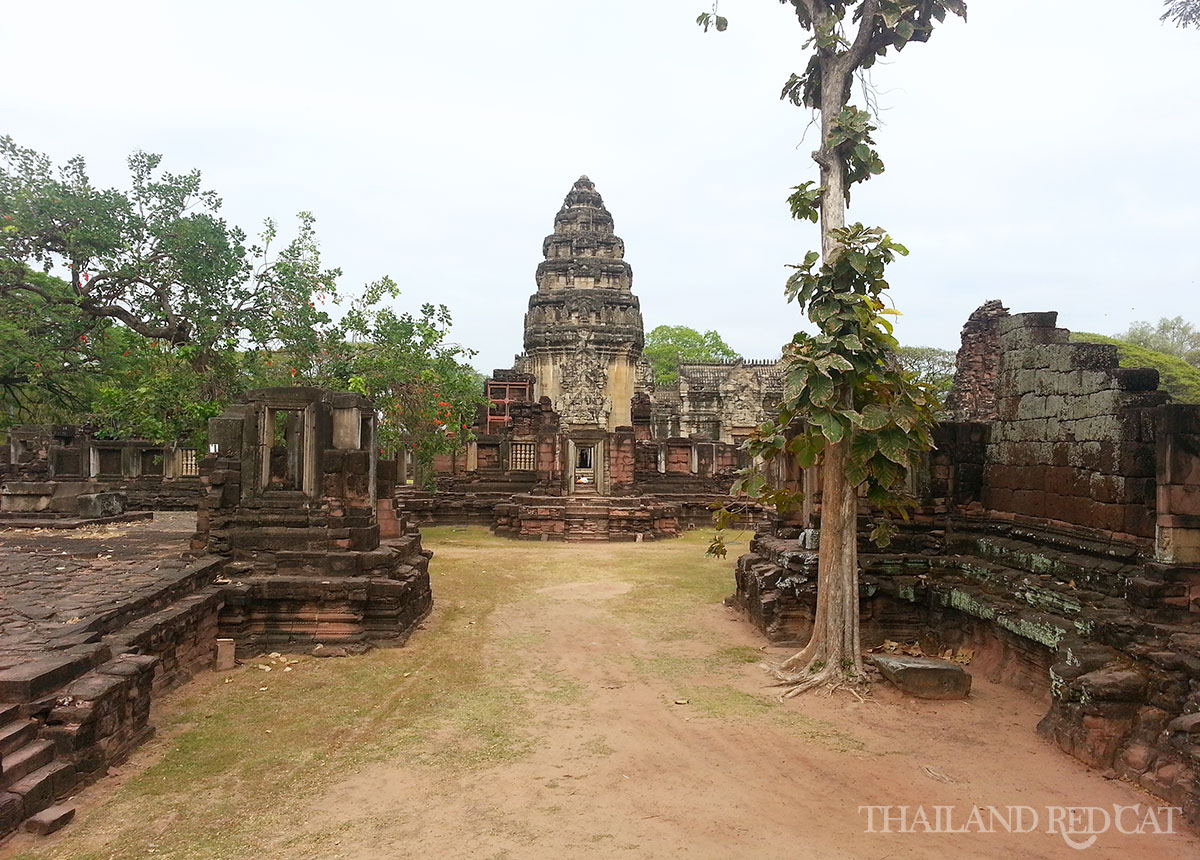 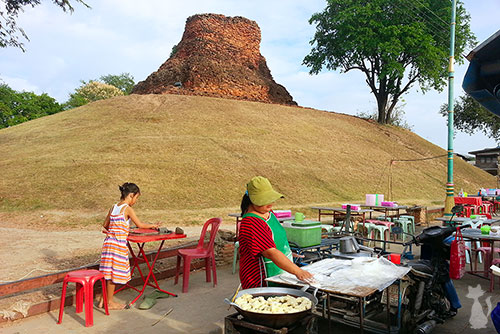 More than 800 years old, the temple complex in the Phimai historical park is one of the most important Khmer temples in Thailand (along with Phanom Rung in Buriram).

It is believed that this temple has actually been the inspiration for the world famous Angkor Wat in Cambodia. It also marks the end of the Ancient Khmer Highway. In fact, Phimai was once territory of the Khmer empire that is now known as Cambodia.

Phimai is located about 60km northeast of Korat and to get there you can take a minivan or bus from the Korat bus terminal. One way fare is 50 Baht. I recommend you take the minivan as it’s faster than the bus (45 minutes compared to one hour and fifteen minutes).

That’s the highlights in Korat! If you want to know what’s going on in Thailand’s 3rd biggest city after sunset, check out my guide on the nightlife in Korat.