Do Thai Girls Only Want Our Money?

I meet so many guys that have been living in Thailand for several years and tell me: “The girls are all the same, they only want your money!” What I then usually figure out is that just by looking at their girlfriend (or wife) I know she has been working in a bar or was just another sort of hooker.

You can meet two different types of girls in Thailand: Those that don’t have a job (hookers included of course) and those that do have a job. Student girls are not included as they are still figuring out what type of girl they wanna be once they’re finished with their thesis.

If you are going for a hooker, sure why not, but then of course she has a bad character and even if you can bang her for free she will try to get some money another way. Like ask you out for shopping, tell you about her family’s “small” problems, or just expect you to take care of her. If you are only out for some fun and don’t want to meet her again after the first night, no problem she will find someone else or even has several other sponsors already.

But then if you are really out for some serious relationship of course you are better off looking for a girl that has a regular job. I have been working for two different Thai companies in Bangkok and met so many beautiful girls that can take care for themselves. They like foreigners because they think they are white, handsome, and maybe more faithful than Thai men. Of course many Thai women are looking for a Farang with money to have more financial security. But then, isn’t it the same with a lot of women in our home country? 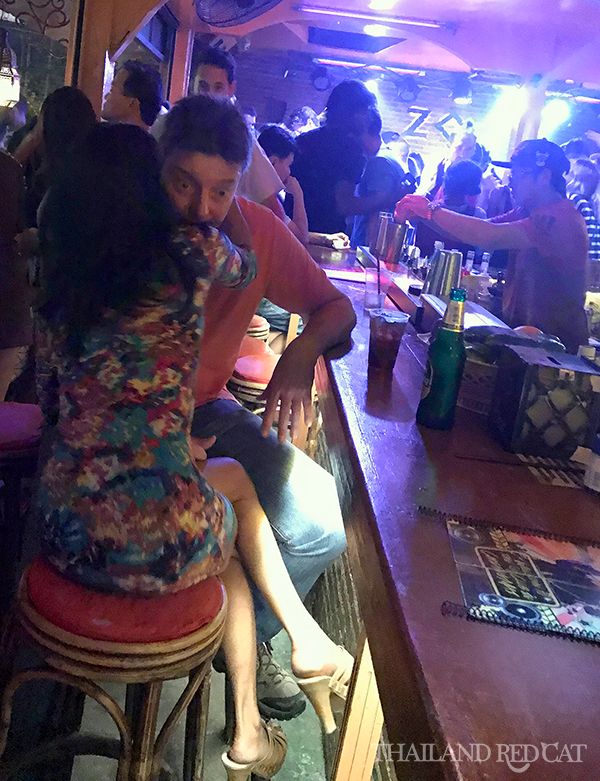 So many guys think it’s just so more convenient to get some bar girl than just walking around public places like the mall and smiling at a girl they like as she often looks at you like an alien. If you do smile however chances are that she will smile back.

It’s really a phenomenon, often Thais look at you dead serious and if you give them a smile they change completely and smile back immediately. Go meet a “normal” girl with an ordinary job (e.g. by using Thai Friendly, the most popular dating site among expats in Thailand) and you will make a whole different experience than with a bitch that is good enough to bang a few times but then would only start sucking your money.

The truth is there are lots of foreigners that have a happy relationship with a Thai woman and the only reason why a lot of people don’t know about it is because they are hanging out in the bars all the time and get to hear the sad stories that have started and ended in the red light district (often if a Thai hooker breaks up or divorces with her guy she goes back to beach road even though she has enough money just because it’s so much easier than looking for a real job).

I know so many people that had better experiences with their relationships, like once I had a business meeting with a rich English restaurant owner that speaks Thai and has been married to a Thai woman that is a high-ranking manager at CP, for more than 30 years already. Or my ex-coworker that is married to a Norwegian guy, she has a pretty good job and income and now decided to quit and follow her husband to Norway to take care of his sick mum.

And I have student girlfriends who never ask for money but clean my room and do my laundry every Sunday. Which kind of hooker would do that for you? None, with no exceptions. Believe me I tried. Why would they they are not used to work anyway. Just stay away from the bars for a month and you will meet those foreigners telling you different stories.

One of the easiest methods to figure out if you’re talking to a hooker or not and you speak to her in Thai is by listening if she uses the polite particle “ka”. Normal Thai girls are polite when you first talk to them and use “ka” in every other sentence. Hooker’s don’t! One of the advantages of being able to speak Thai.

The truth is that the general saying of guys that had bad experiences with Thai girls, been cheated, squeezed for money and ended up with a broken heart have made this experience with hookers most of the time. Of course there are also “bad” girls with a normal job that are out for money only, but once again that kind of girl you have in every country in the world and if you get divorced with a woman in Germany, Australia or the United States it will normally be a lot more expensive than it is with a Thai girl (unless you have given her a 51% ownership of your Thai Limited Company or bought property under her name).

If you stay in Thailand for longer you can also observe and experience how Thai guys are dating the girls. And they often don’t have much money at all but date several girls at a time and even let them pay the bills! Why? Because they know how to date a Thai girl without spending much money (or just pick up karaoke girls after they finished working, not just motorbike taxi drivers like to do that).

You can say a lot about Thai girls, that they have some really weird habits and stuff, but it’s definitely not right generalizing and saying that all Thai girls are bad and only want your money. You can make a Thai girl fall in love with you and money has never bought any girl’s heart.