Having Sex With A Thai Bar Girl

Every year thousands of airplanes land on Thailand’s airports and they are packed with single men of all ages or men in unhappy relationships or marriages. When they get asked by people back in their home countries what they like about Thailand and why they are going there for holiday every year the answer usually goes like the beaches are so nice, it’s always warm and Thai people are so friendly.

What they are not telling is the main reason for coming to Thailand and that’s because of Thai girls. Some are just out for sexual adventures while others are looking for a girlfriend or wife, but what most of them have in common is they go for bar girls. I’d say more than 80 percent of the foreign men coming to Thailand (who are not in healthy relationships) are having sex with a Thai bar girl or any kind of Thai hooker – and out of all these guys not more than 10 percent would admit that to their friends back home. 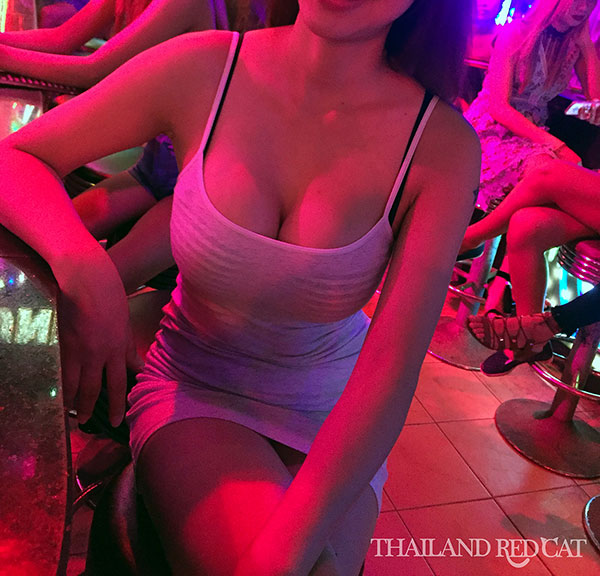 A lot of foreigners don’t even want to call them “prostitutes” because they think it’s just so different here in Thailand where you can pay for a girl the first time, then get her phone number and arrange the second date for free and the only thing you have to pay for is dinner and whatever she randomly picks up at the 7-Eleven while you go buy the condoms. Thai bargirls don’t make you feel bad and guilty by what you are doing, they even give you the feeling that they really like you – which is actually no lie in most cases.

You walk into a go go bar or beer bar and take a seat. If you come without female company it will not take long until one of the girls spontaneously comes over to you (not the one that takes your order) or you make eye contact with one of them and when you return her smile she will come over. Standard what she says is like “Hi what your name where you from you come to Thailand for holiday I like you you buy me drink?”

By “drink” she means lady drink and this is one of the three sources of income for bar girls in Thailand and the only reason they call it like that is because these drinks are more expensive than drinks for the customers at around 150 Baht (and her share is around 50%, if at all, usually it’s 50-70 Baht) usually no matter if she orders coke or tequila. It will not take more than five minutes for the girl to ask for a lady drink and then usually for a second one before she asks you where you stay and if you want to go to your place together.

There comes the second and most significant part of the Thai bar girl’s income: her price for sex. You usually have two options: Short time, means one shot and for about one or two hours and long time, means several shots and she stays with you until breakfast the following day (or brunch). Short time is between 1,000 and 2,500 Baht and long time between 2,000 and 4,000 Baht. Some girls let you make an offer and just ask “how much you give me” and when you arrange say 1,000 Baht (and she likes you) she sleeps at your place anyway – unless you tell her to leave after which is absolutely fine.

You also have to pay the bar fine (between 500 and 1,000 Baht), that’s the money you pay to the bar so you are allowed to take the girl outside – and it doesn’t include the girl’s share. The third source of income for a Thai bar girl is her salary which is usually quite low if she gets any at all at around 6,000 Baht per month.

Once it’s time for the girl to leave your place (or short time hotel which are common all over Thailand and rooms cost between 300 and 500 Baht for one or two hours) she usually gives you her phone number or other contact detail if you ask her for it. Like this you can arrange to meet and bang her again before she starts or after she finishes work or on her day off (they usually get 3 days off per month, if she takes more the bar will cut her salary or, more commonly, she has to pay the bar fine for every day she takes off).

Like this a lot of foreigners initially see their new Gik as a cheap and fun fucking friend, but then after a while they start developing feelings for her. “She doesn’t ask for money anymore” is what they often think, but then forget that she will be gone once the restaurant bills, transportation, accommodation, little presents etc. aren’t paid for or provided anymore.

You see a lot of these couples walking hand in hand around town and the guy proudly showing her off like a trophy when the more experienced foreigners and locals are just shaking their heads or making fun of them. The market of prostitution for Thai men is far bigger than for foreigners, but Thai men would never let anyone see them hanging out with a hooker in public or walking around with her in the shopping mall as it would totally damage their reputation.

A lot of foreigners even go as far as marrying bargirls and / or taking them to their home countries – but that should be a different story.

Many foreigners don’t know what differentiates a good Thai girl from a bad Thai girl.

It’s not just the newbies to Thailand but even a lot of expats that live here for years and just don’t get out of the bars of Nana, Pattaya and Patong. Often they think it’s just so much more easy and fun to hang out with the bar girls instead of making some effort to learning Thai and approaching a girl with an ordinary job.

But maybe another reason why a lot of foreigners fall in love with a bar girl too easily and then don’t get to learn Thai is because the Thai bar girl’s English is generally decent – at least better than the standard office girl’s – and bar girls are too lazy to teach you Thai anyway, often they don’t even want their Farang boyfriend to speak Thai so they can continue gossiping about him with their friends right in front of his face.

If you have just a couple of Thai girl friends with normal jobs like most expats in Thailand do using Thai Friendly, even uni girls that do no sideline and learn to speak Thai you will easily be able to tell the difference between a good and bad Thai girl not only by how they speak, but also by how they behave.

One easy, obvious but true thing even beginner students of the Thai language can watch out for is how regularly she uses the polite particle “ka”. Bargirls use it very rarely while Thai girls with a good character do use it in every other sentence – especially when talking to strangers and getting to know new people.

It’s important to know that there is only one reason why Thai girls decide to work in the bar: Because they come from very poor families with the majority from the northeastern region of Thailand (Isaan) and so they are working not just to support themselves but basically the whole family. Does this make them bad girls? I’d say no. You just have to be honest with yourself and don’t believe them too easily that they really like you because it’s their job to make you feel that way so they can get at your money.

Of course there are always exceptions and you can have a successful long term relationship with a Thai bar girl, though you have to be aware that you are most likely supporting her financially all the time because she hasn’t got a CV to apply for a normal job (except if you buy her a Thai restaurant or massage shop here or in your home country – but then it’s also you who makes all the investments and owns the business so she is kind of your employee that way). Or maybe you are just lucky enough to find a girl who just recently started to work in the bar.

Well that’s a lot of different thoughts on this hot topic. I know there is so much more to write and discuss about but I think that should be enough for now. Well, maybe one more thing:

Thailand is among the countries that have the highest rates of people infected by the HIV virus. Obviously the majority of these people are working in the “entertainment industry”. So don’t even think about having sex with a Thai bar girl without using a condom. Every 7-Eleven in Thailand has a wide selection of condoms right at the cashier for as low as 35 Baht for a package of three.

Speaking about safety in terms of the bar girl stealing from you, this is usually not a risk if you pick up the girl from a beer bar or go go bar where she is employed at so you know where to find her in case there are problems – and she knows that too. It’s a different story with freelancers and it does happen regularly and in various ways that these Thai girls steal money from foreigners.