Kamphaeng Phet literally means “Diamond Wall” and this refers to the former military significance during the Sukhothai and Ayuthaya eras, when the strong city walls served as a prospective barrier against attacks from Burma and Lanna, roughly from the 13th to 18th centuries.

Today Kamphaeng Phet, located 293km north of Bangkok, is often overseen by travelers that rather give Sukhothai or Phitsanulok a visit halfway on their journey from Bangkok to Chiang Mai. For those who come here though, chances are good to explore the remains of the “Diamond Wall” amongst only few other tourists, as well as the impressive ruins of temples, pagodas and Buddha images that are part of the UNESCO World Heritage Site “Historic Town of Sukhothai and Associated Historic Towns”.

I was glad to have visited Kamphaeng Phet last month, coming from Sukhothai, as part of my little trip to some of northern Thailand’s most significant historical towns. Not just the historical park was a highlight of my stay here, I was also surprised how much else Kamphaeng Phet has to offer (even after sunset), the capital city of the province of the same name that is scenically located on the Ping River. 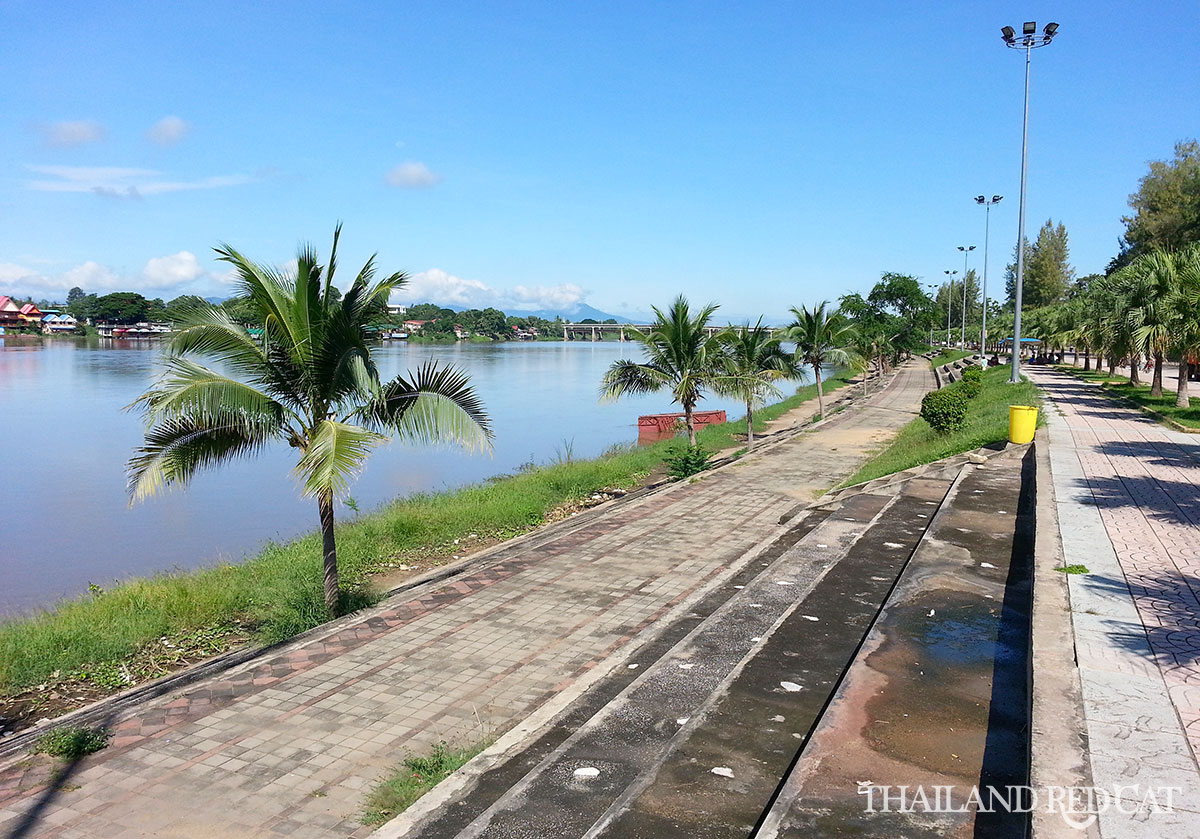 For your orientation, the Kamphaeng Phet city center can be found on the eastern bank of the Ping River starting from the northern tip of the little island called Koh Klang Maenam Ping (Ping River Island – there is a bridge connecting it to the mainland and it makes a beautiful afternoon stroll).

That’s not just the area where the town’s best restaurants, bars and the night market are located, but also where most of the town’s hotels can be found, including the popular Chakungrao Riverview Hotel and Navarat Heritage Hotel. A handful of other great value-for-money hotels are located on the more quiet western side of the river, like the Praepimpalai Thai Spa & Resort.

The Kamphaeng Phet historical park is divided into 2 main areas: The old city and a larger “northern zone” 1.5 km from the old city walls where the majority of the town’s ruins are found (see the map below). Each of them has a 100 Baht entrance fee or you can buy an “inclusive ticket” for 150 Baht which gives you permission of entry to both areas.

Unlike in Sukhothai, there is no shared taxi-pick up (songthaew) service from downtown Kamphaeng Phet to the historical park and that means you have to organize the transport by yourself. Most of the hotels (including the ones I mentioned above) have motorbike taxi services taking you to the park. Fares are highly negotiable (one way 40-60 Baht to the old city, 60-80 Baht to the northern zone).

Bicycles can be rent at the northern zone for 30 Baht a day. I did rent one there and I strongly recommend you to do so too as the areal is quite extensive, otherwise you would walk for like 20 or 30 minutes from temple to temple. You can see what I mean in my video (below). 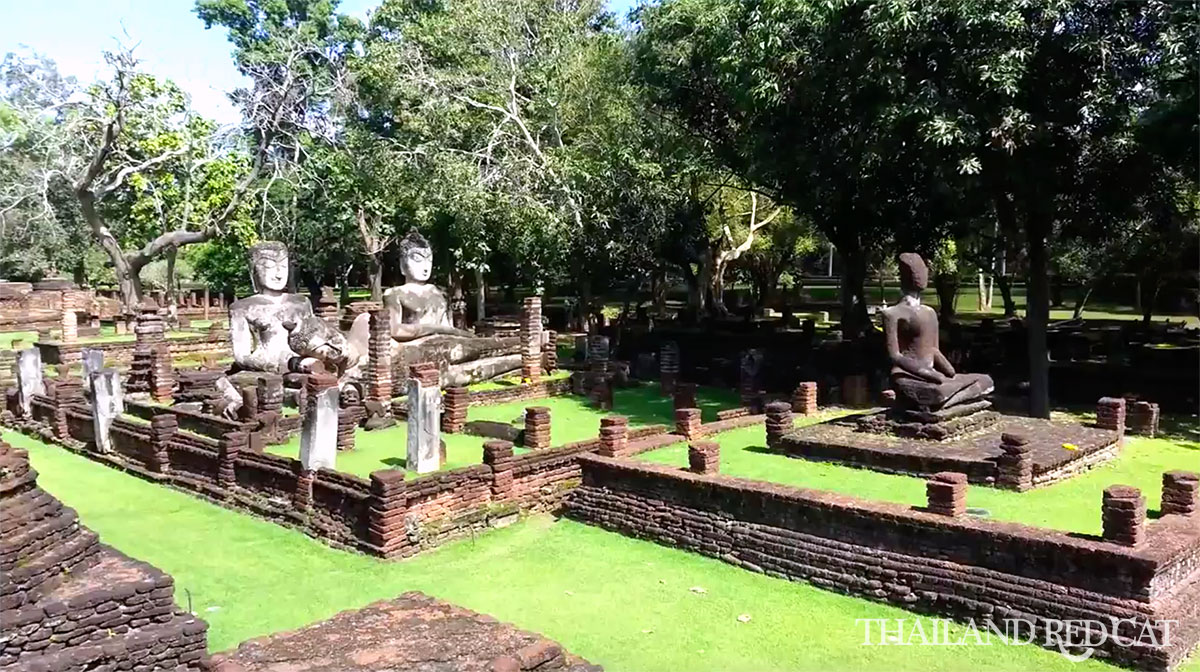 Wat Phra Kaeo is the royal temple right in the town centre and used to be adjacent to the royal palace, which is now in ruins. The temple was used for important city festivals and thus had no monks in residence. The Buddha images at Wat Phra Kaeo are probably the most photographed ones in the whole historical park. 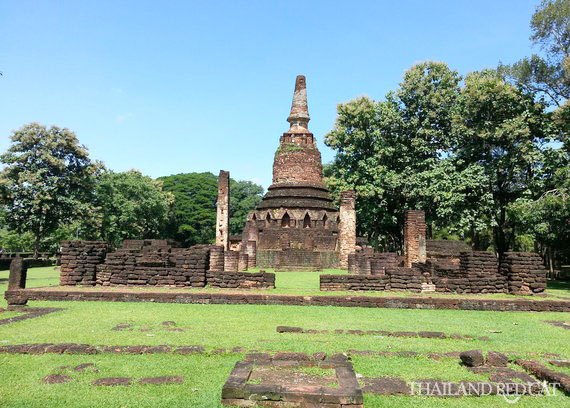 Just 100m southeast of Wat Phra Kaeo you can find the second temple of the Old City: Wat Phra That, built in typical Kamphaeng Phet style. The 15m wide (square base), centralized Chedi is built with a mixture of laterite and bricks.

The northern zone of Kamphaeng Phet Historical Park has the majority of the temples and ruins. The three most remarkable and best preserved ones are the following: 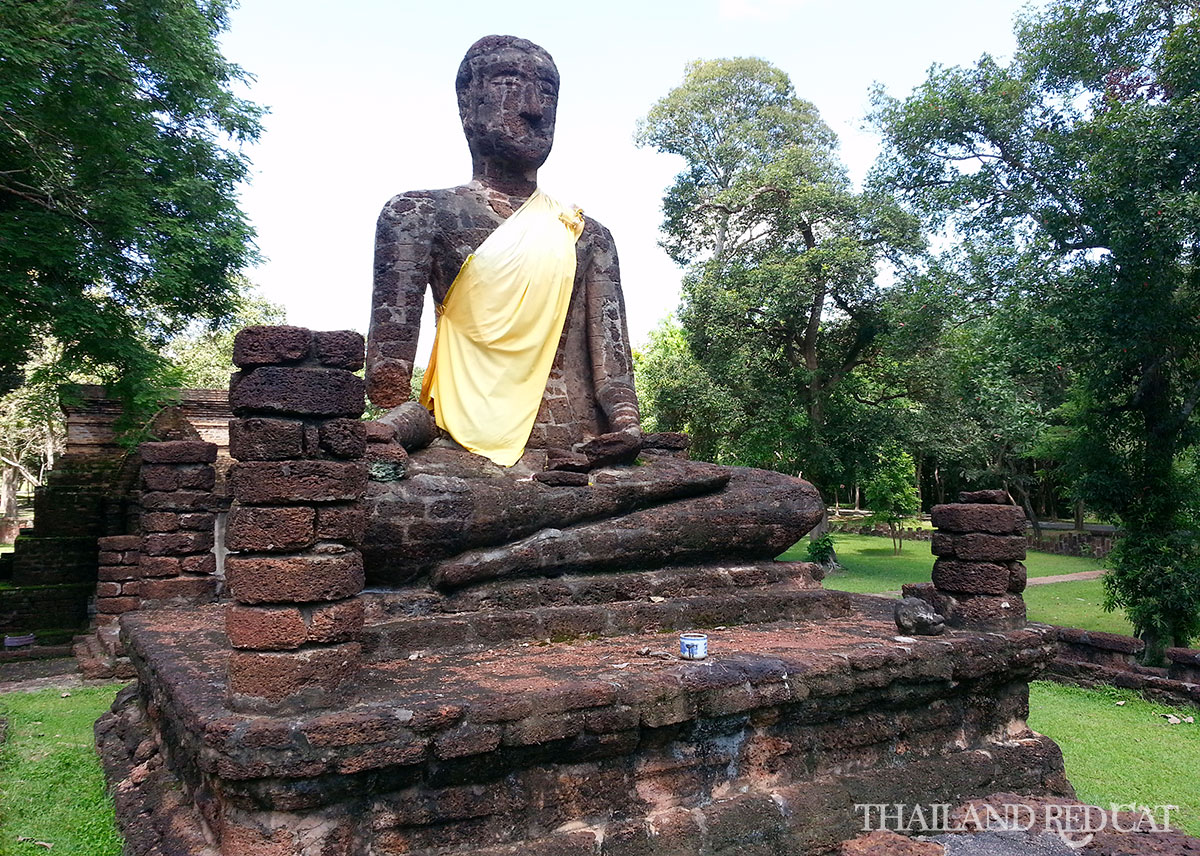 Wat Singh has been constructed during both the Sukhothai and Ayutthaya periods. For me this was one of the nicest sites in the park and that’s mainly because of the remarkable (weather-worn) Buddha image you can see in the picture. 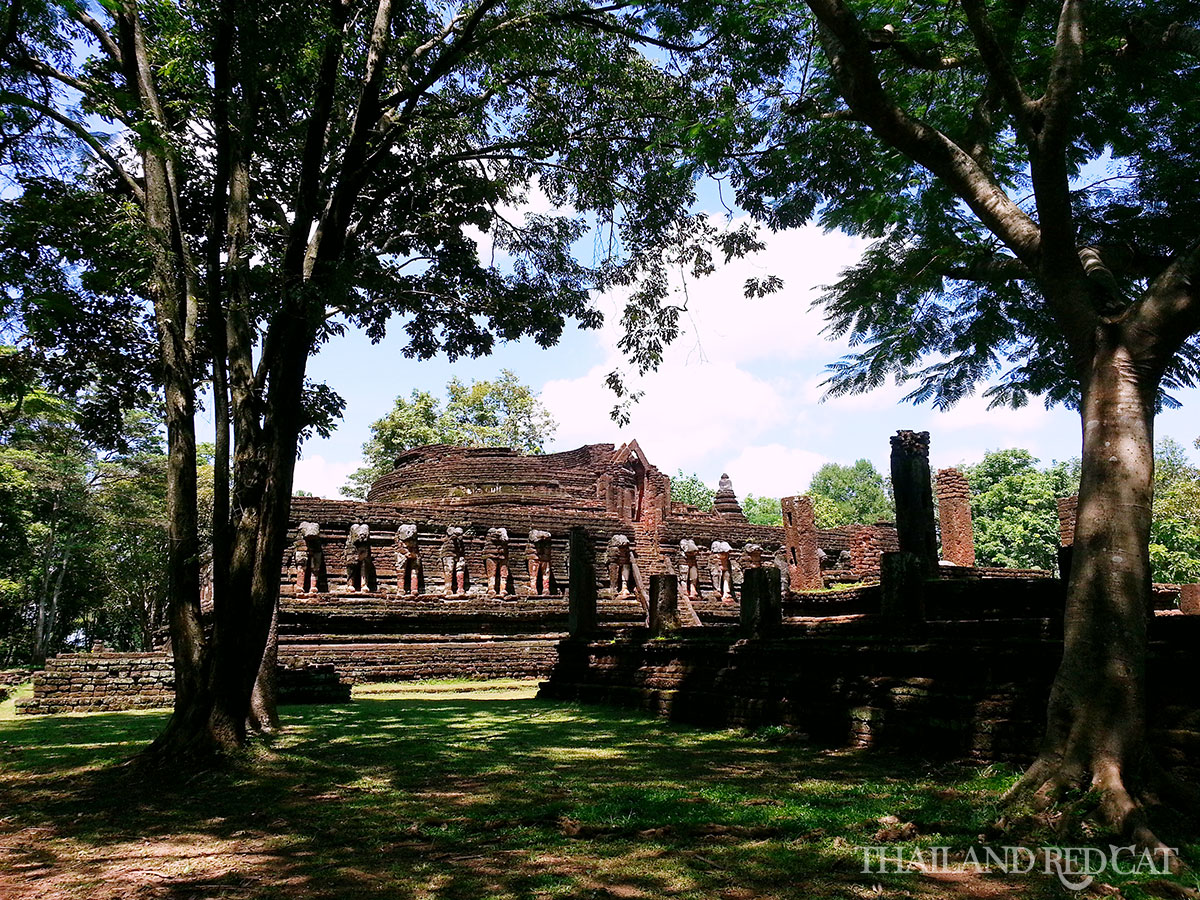 Situated on a high hill, Wat Chang Rob has a beautiful half-elephant-buttressed wall (68 figures). The main Chedi in the middle of the yard is of Ceylonese style, however as you can see in the picture, its top part is broken down. 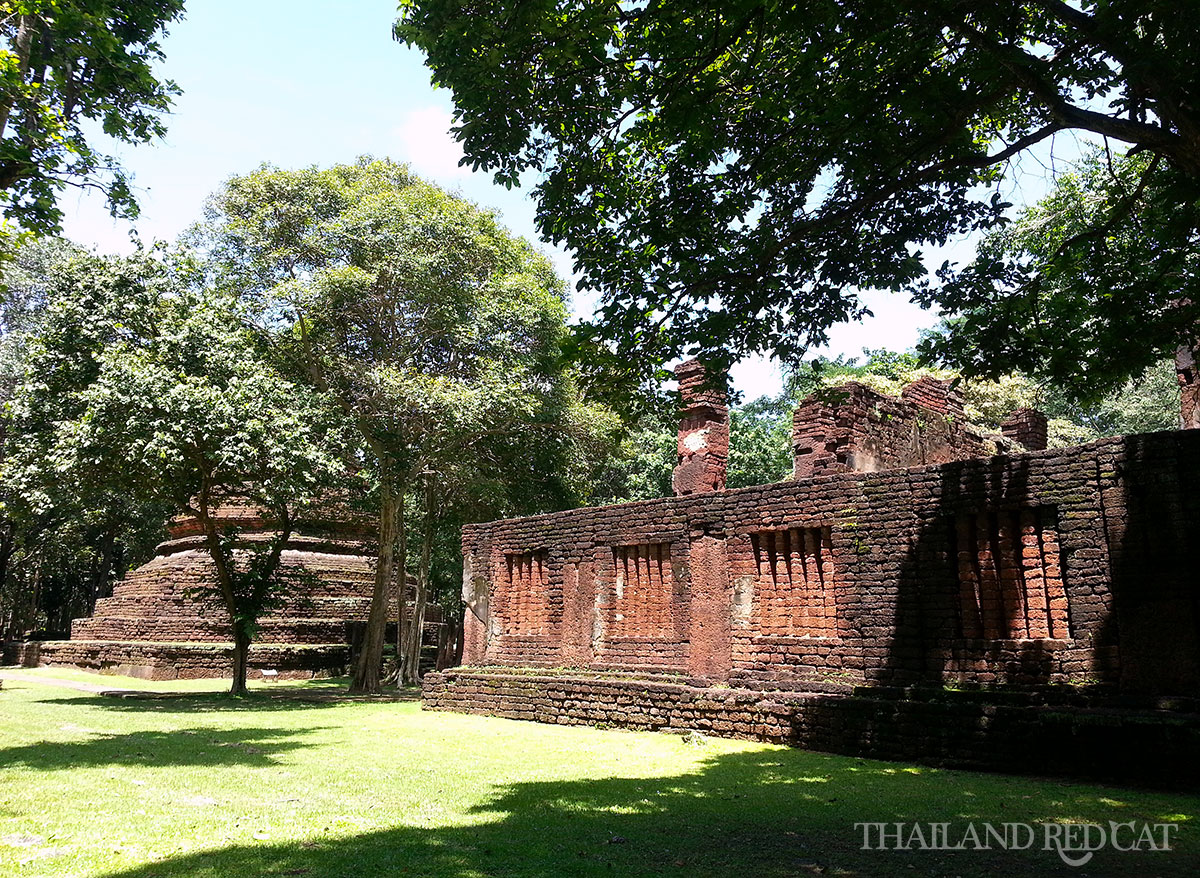 Wat Phra Si Iriyabot is one of the largest, but not one of the best preserved temples in the park. It houses shattered remains of sitting, standing, reclining and walking Buddha images which are all built in the classic Sukhothai style.

That’s your guide to Kamphaeng Phet Historical Park! Make sure to watch my little video that has the best places of the park including Wat Phra Kaeo, Wat Singh and me riding the bicycle from Wat to Wat.