When I headed out of Bangkok a couple of weeks ago I was sure that Sukhothai would be the highlight of my little trip to some of the most important historic towns in lower northern Thailand.

Though I was wondering if the nightlife in Thailand’s first capital was as exciting as exploring Sukhothai Historical Park by bicycle. The once bustling and thriving city nowadays has a population of just below 40,000 and I was told by a Thai bar owner on my previous stop in Phitsanulok that most of the region’s young people move to the bigger cities for studying or pursuing well paid jobs.

There is no university or college in Sukhothai and that’s usually a sign that there isn’t much of a thriving nightlife scene in town. But I wanted to figure it out by myself and here we go.

After sunset and a few glasses of local Sang Som whiskey with some local guys on the side of the road in front of my hotel I took a cool shower and went out again, starting to walk around and figuring out what New Sukhothai has to offer after sunset. Most of the streets were dead empty and offered views of just some usual small town out in the province, like here at the clock tower: 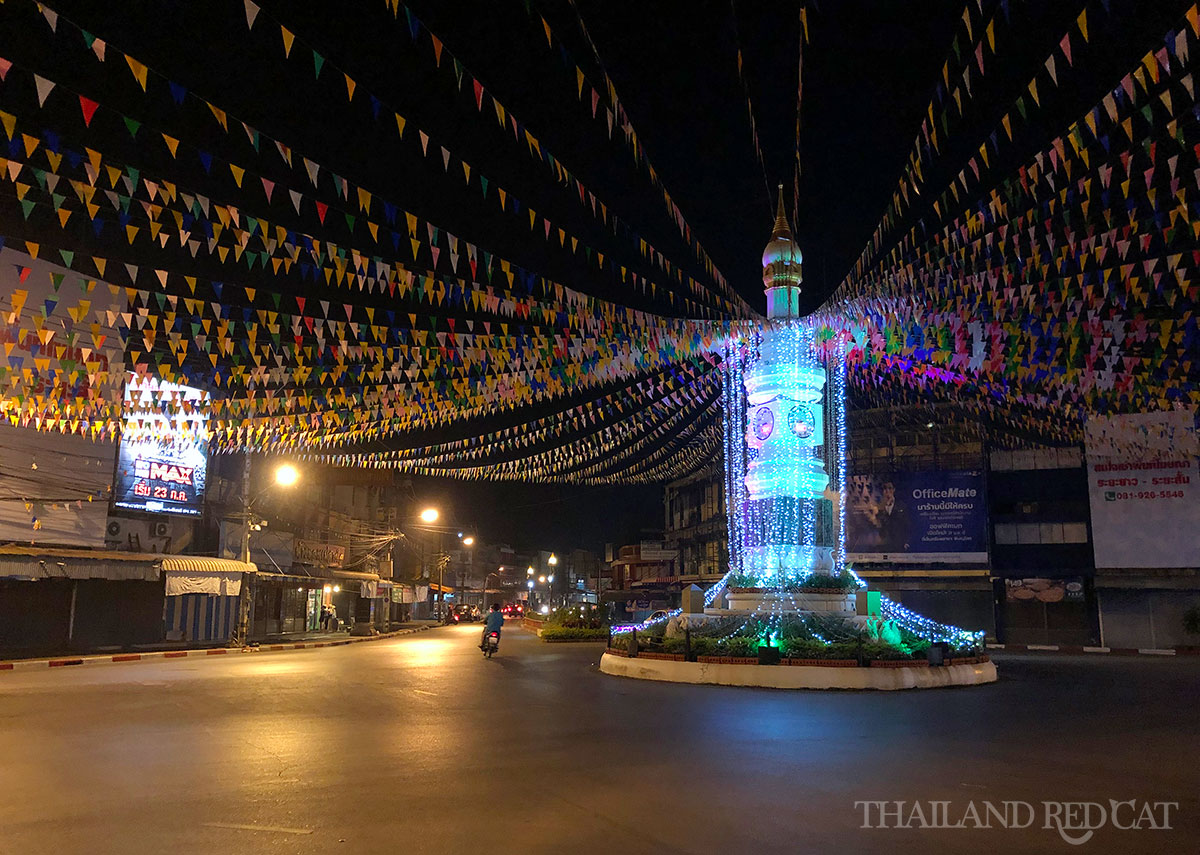 Since I didn’t spot any bar or even a Thai karaoke club I decided to walk to the night market, since this is always the area where most of the locals like to hang out in the evening. 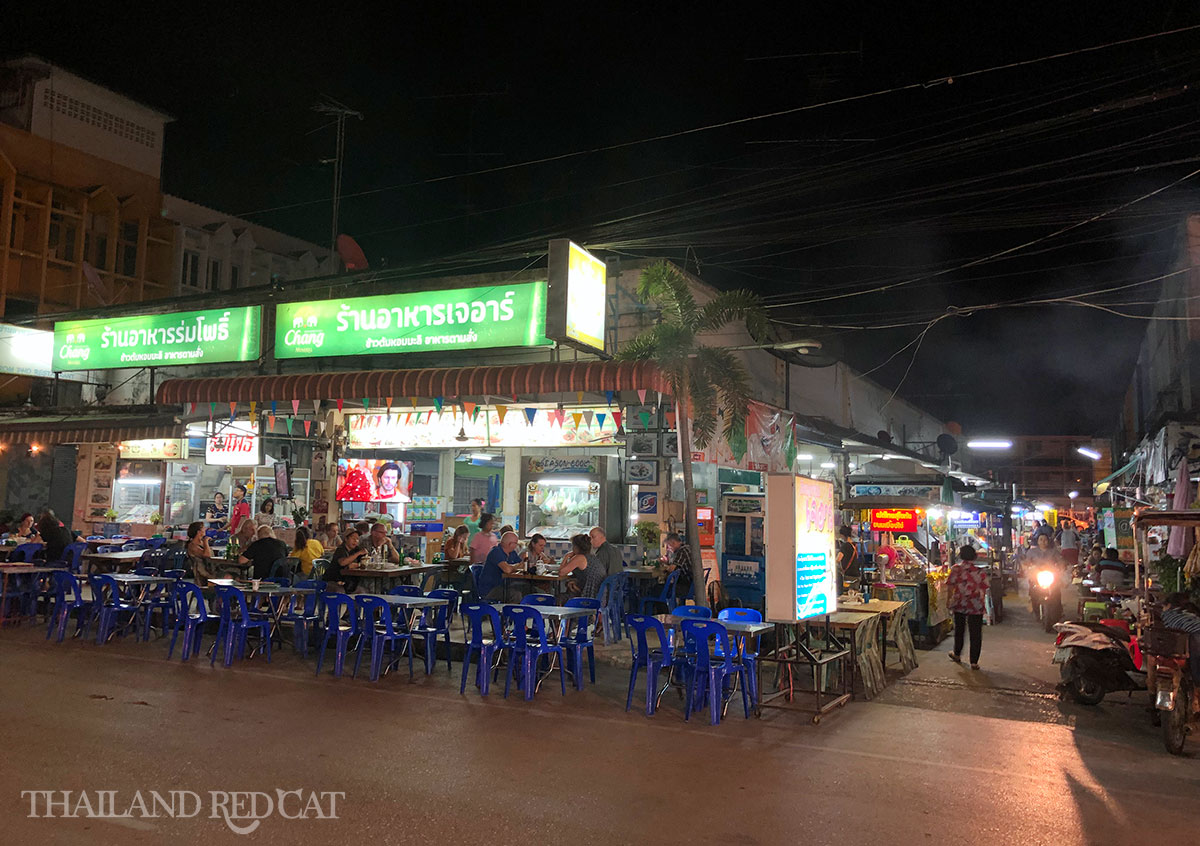 As I reached the market I did see a lot more people and quite a few cool street restaurants that served beer as well, but nothing really exciting (for single guys like me). And somehow more Farang girls sitting together in those eateries than Thai girls.

There was one bar called Fong Bear just 100m down the street from the night market:

I pulled out my phone, searched for “bars” and it turned out that the biggest cluster of bars is located in the northern part of Sukhothai, about 1.5km from the night market.

So I walked up there to check it out.

The main local nightlife area in Sukhothai with about 10 different indoor and outdoor bars is on Soi Pracha Ruamjai.

Club 64, Route 23 and In Black seem to be the most popular night clubs here. Since it was still quite early, I picked some random bar that had a free pool table, English live football on a huge screen (projector), big Singhas for 90 Baht, and some of the nicest ladies I’ve seen in town.

Have a look at the map below for the exact locations of these places. 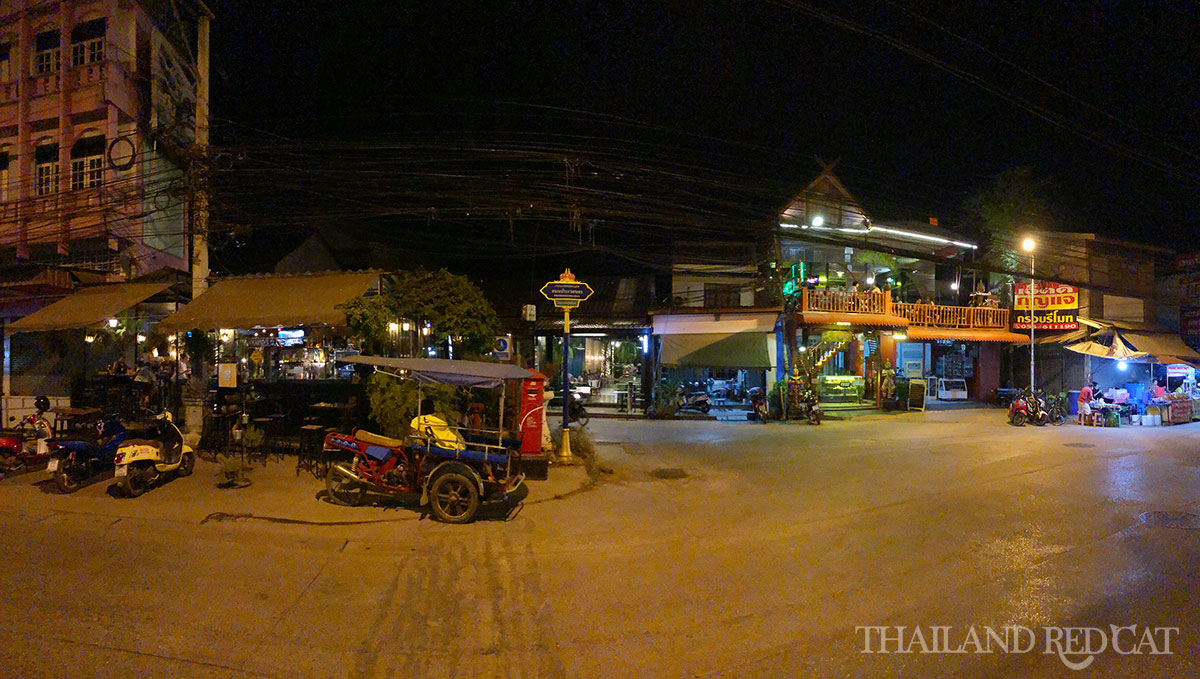 There is really only one 100% Farang oriented bar in Sukhothai. It’s called Chopper Bar and can be found right at the western end of the foreign hotel “strip” on the west bank of the Yom River, see the map below.

The place is pretty cool, has live music every night, decent food, fruit cocktails and the usual bar beverages, sees more Farangs than Thais though the waiters (and waitresses) are pretty nice, kind and talkative. See below the short video I took there, keep in mind it was September (low season) so it wasn’t too busy at all. The guitar player didn’t mind, he was still happy to play for us for like two hours.

That’s about it for the nightlife scene in Sukhothai. It’s really true that there is a lot more action going on in the bigger neighbor cities like Phitsanulok or Kamphaeng Phet. But if you’re in town like me mainly for visiting the temples, the offer is alright and you now know where to head for the best nightlife spots in Sukhothai.

Map of Nightlife in Sukhothai