If you read through all the different Thailand forums on the internet you have so many foreigners complaining about their bad experiences being ripped off in Thailand. It’s usually about Thai people that tell you a lie in order to get some money out of you without providing the promised service, sometimes not giving anything in return at all.

This is what is called a scam and not just tourists in Thailand encounter them, but also expats actually living here that just haven’t got the experience to know when to believe a Thai person and when better to be careful.

So why are there so many scams in Thailand? Is it because a large part of the Thai population is still extremely poor working for 330 Baht a day or even less and see a “walking ATM” in every foreigner they come across? Or is it because we always have that nice marketing slogan “Thailand – Land of Smiles” in our head and just tend to believe all the crap Thai people are telling us if they give us their charming smile? As usually, it must be a combination of both.

Below are ten of the most common scams in Thailand and a few of them are actually being conducted by foreigners that run out of money – there is a growing number of them who rather go this way than “giving up” and getting on a plane back to their home country.

The famous scam that a lot of newbies to Thailand run into as they think experiencing a ping pong show in Bangkok’s oldest red light district, Patpong, is a must do. The scam consists of Thai guys approaching you at the night market in front of the go go bars offering free ping pongs shows and even better: drinks for just 100 Baht each. This often turns into a nightmare when it’s time to check the bill and it’s rather a couple of thousand Baht than a couple of hundred. You then have no choice but to pay what they ask for as it can turn violent if you start make an argument. 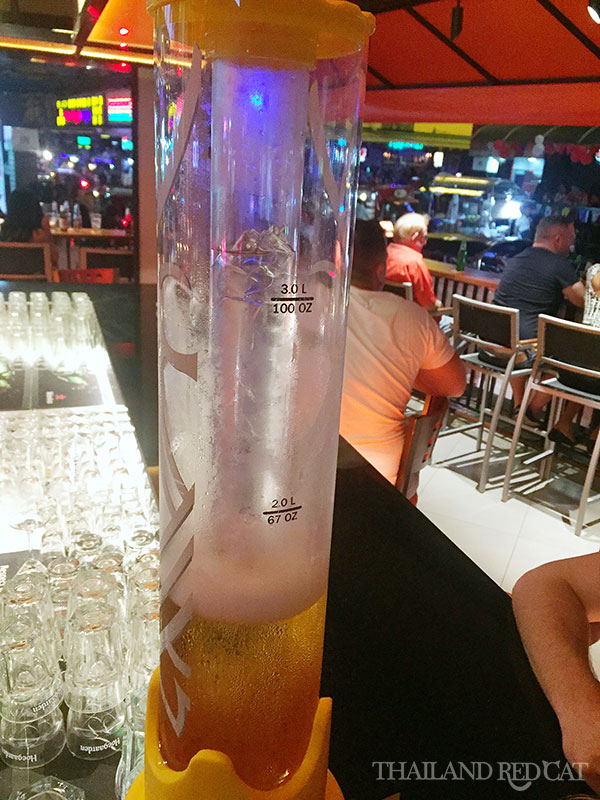 This one doesn’t seem to be discussed (or noticed) anywhere, but it’s really annoying. Just yesterday I went to one of my favorite bars here in Bangkok with a few friends who visited me from Germany (not going to mention the name, I’ve seen it before at other places) and I thought it might be a good idea to share a beer tower.

It’s supposed to be 3 liters of draft beer and if you look at the outer tube that is actually the case. But then they put an additional smaller tube with ice inside that takes off at least 20-30% of the space. So you don’t get 3 liters but less than 2.5 liters. I didn’t even start complaining with the manager – next time I will just order 3 jugs instead.

The most simple kind of scam. Well it’s really fraud when you are given the wrong change in the restaurant, bar or even at the minimart by purpose. Like you pay with a 1,000 Baht note and they give you change as if you paid with a 500 Baht note. Or just “forget” a one hundred Baht note.

This almost exclusively happens in the most touristic areas like Phuket’s beaches, Khaosan Road and Sukhumvit in Bangkok and most areas in Pattaya.

All these terms are closely related to each other. So it happens at famous tourist attractions like the Grand Palace or National Museum in Bangkok that you are approached by a local Thai before you even reach the attraction and he tells you it’s closed today (usually they give you a Buddhist national holiday as a reason which they assume foreigners don’t know about).

They are then inviting you to go to another attraction together which turns out to be a gem, silk, tailor or other kind of shop. They try to rip you off by telling you lies like you can buy the products there for a very cheap price and make a huge profit by reselling them in your home country. Tuk Tuk drivers are also often involved in this kind of scam, however again most of these operate in the tourist areas of Sukhumvit, Silom and Khaosan.

If you are going to rent any kind of vehicle in Thailand whether it’s a motorbike, car, jet sky or boat – make sure you let document all scratches and dents when signing the rental contract (if any). It’s also a good idea to take pictures of the vehicle from different angles. Very famous are the jet sky scams in Pattaya and Phuket where tourists are regularly blamed and held liable for damages they haven’t caused.

Several scams in Thailand are related to travel. So it happens that tourists are approached in front of the railway station in Bangkok by local Thais pretending to be “officials” working for the State Railway of Thailand and helping to book the train ticket. They take the tourists to a local travel agent and pretend to call the ticket office, then saying the train is fully booked and offering you an overpriced bus ticket instead on which they make some good commission.

There are also regular incidents where foreign travelers report being robbed valuables, especially during overnight trains and buses. This even happens during day travel when buses stop for food and all passengers are requested to get off. Also beware of strangers in overnight trains who invite you for drinks as some foreigners get drugged and when they wake up they find their money and other belongings gone. 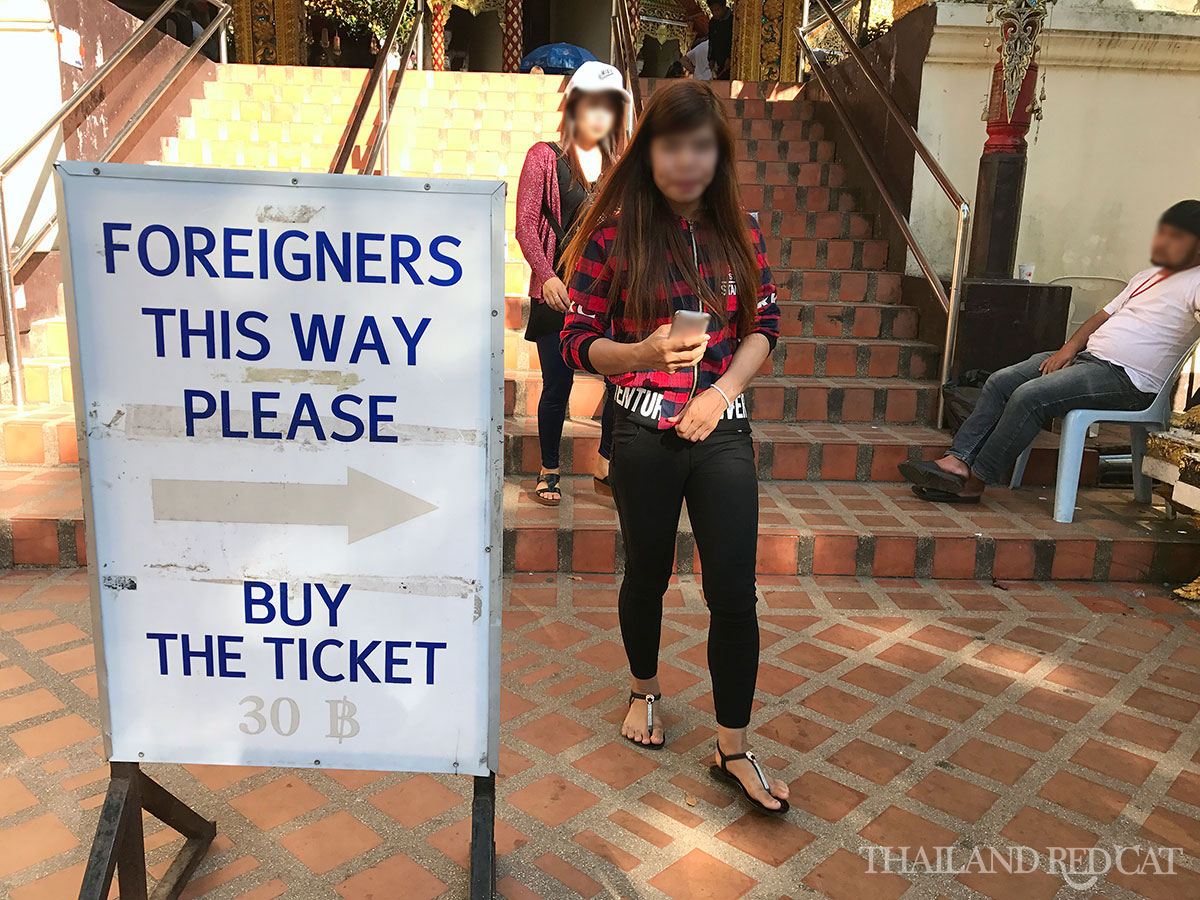 Examples: The Grand Palace in Bangkok, free entry for Thai people, 500 Baht for foreigners. University fees are at least 30% higher all over Thailand for foreign students as opposed to Thai students. And probably the most extreme price discrimination I’ve encountered so far: While Thai people can buy a ticket for the Muay Thai fight in Bangkok for 180 Baht, the cheapest ticket for foreigners is 2,000 Baht. That’s insane, what you think?

It doesn’t matter if you go to a beer bar, go go bar, karaoke bar or night club as a foreigner – there is always the possibility that one of the Thai staff who is handling your bill writes down the extra beer you didn’t order, the lady drink you didn’t agree on to pay or just charges for a few extra pool games and then puts the additional cash into his or her own pocket. Especially when you have had more than just a couple of small beers.

This even happened to me quite a lot in my favorite pool bar in Bangkok, when I checked the bill they just told me it’s 13 games instead of 11 so what I do now I let them count the papers right at my table in order to avoid this kind of scam.

There are countless of Farangs who come on a holiday to Thailand and fall in love with a Thai bar girl. When they return to their home country they try to keep the relationship by sending her money as she promises to stop working in the bar and sleeping with other guys. Of course in 95% of the cases that’s a lie and the girl will continue working while receiving regular payments from their foreign boyfriend (or rather sponsor) and a lot of these girls even have several guys abroad sending them money at the same time.

Everyone seems to know about it, but still there will always be foreigners who trap into the bar girl scam and believe crap like her family’s house needs renovation or her parents need money for paying the hospital bill.

You might not even have heard about this kind of scam yet, but this is actually the crime tourists lose the most money in Thailand and it’s one of the scams that mainly foreigners are organizing. What happens is you are given a scratchy card by a stranger on the street for free. He then immediately lets you know that you’ve won a massive price or he gives you a call later to make it appear more authentic. In order to claim your price you have to accompany him to a hotel.

Once arrived there, he will bring you to a conference room along with other tourists who apparently have won as well and then there’s a presentation held by slick Westerners, all of them being well trained sales agents. Now the scam is they offer you timeshare memberships at luxury hotels, resorts or apartments to spend several weekends or weeks every year at an extremely discounted rate. If you do enter one of these too-good-to-be-true deals and make a down payment of several thousand dollars you might end up driving along the beach with your contract in the hands looking for a property that doesn’t even exist.

These timeshare companies are illegal as well as the work of the foreigners who do not hold a business visa and work permit.

There are foreigners who send presents and even money to girls they meet on the various Thai Online Dating Sites without ever having met them in person. My ex student girlfriend told me that she once received a big package full of candies sent from a guy in the United States and she hasn’t even had a video call via Skype with him before, they just wrote each other text messages for a couple of months and then he asked her for her post address.

Now where are the scams in online dating sites? There are some foreigners who get their Thai girlfriends to create a profile on dating sites and respond to messages of guys promising to meet them, but she is out of money so she asks him to pay for the bus or flight ticket to travel to Bangkok from her province. The guy transfers the money to her bank account and never hears from her again.

How to avoid getting scammed in Thailand

Well, by having read this article you are now familiar with the most common scams in Thailand. Generally, the more “touristy” and inexperienced with Thailand you appear to Thais the more likely you are getting scammed.

Most Thai people are rather shy and reserved, and if someone approaches you very straightforward and in fluent English you should always be skeptical. The same thing applies for Thai girls by the way, even in Thailand guys are supposed to make the first step.