Last night I watched my 4th football match in Thailand, a friendly between Muangthong United and PSV Eindhoven. I’m a big football fan in general so I always wanted to experience the atmosphere in the Thai stadiums. It’s great. People are non-stop cheering for their team, even if they are two goals down or lost the game.

And not just the atmosphere in Thai football stadiums is great, but also the quality of the game is better than I expected. Thai players have great technical skills, the main reason why they are not very competitive with European teams might be that they are generally smaller and physically not as “strong” as Farang players.

There are 6 main football stadiums in Bangkok and here is a description to each of them, where they are located and which matches you can watch there:

This is Thailand’s biggest stadium with a capacity of 50,000 seats. It’s also the home stadium of Thailand’s national football team. I watched the game Thailand – Vietnam (3:1, Suzuki Cup, which is the Southeast Asia Cup) there in 2012, my first football game in Thailand. And now just yesterday I watched another one: The semi final of the Suzuki Cup between Thailand and the Philippines (3:0). Not just one of the best panoramic shots I took in Bangkok but also the best atmosphere I have ever experienced in a stadium in this city.

To get there by public transport, take the Airport Link Train to Ramkhamhaeng station. From there, take Bus No. 71 towards Ramkhamhaeng University, it drops you right in front of the stadium. 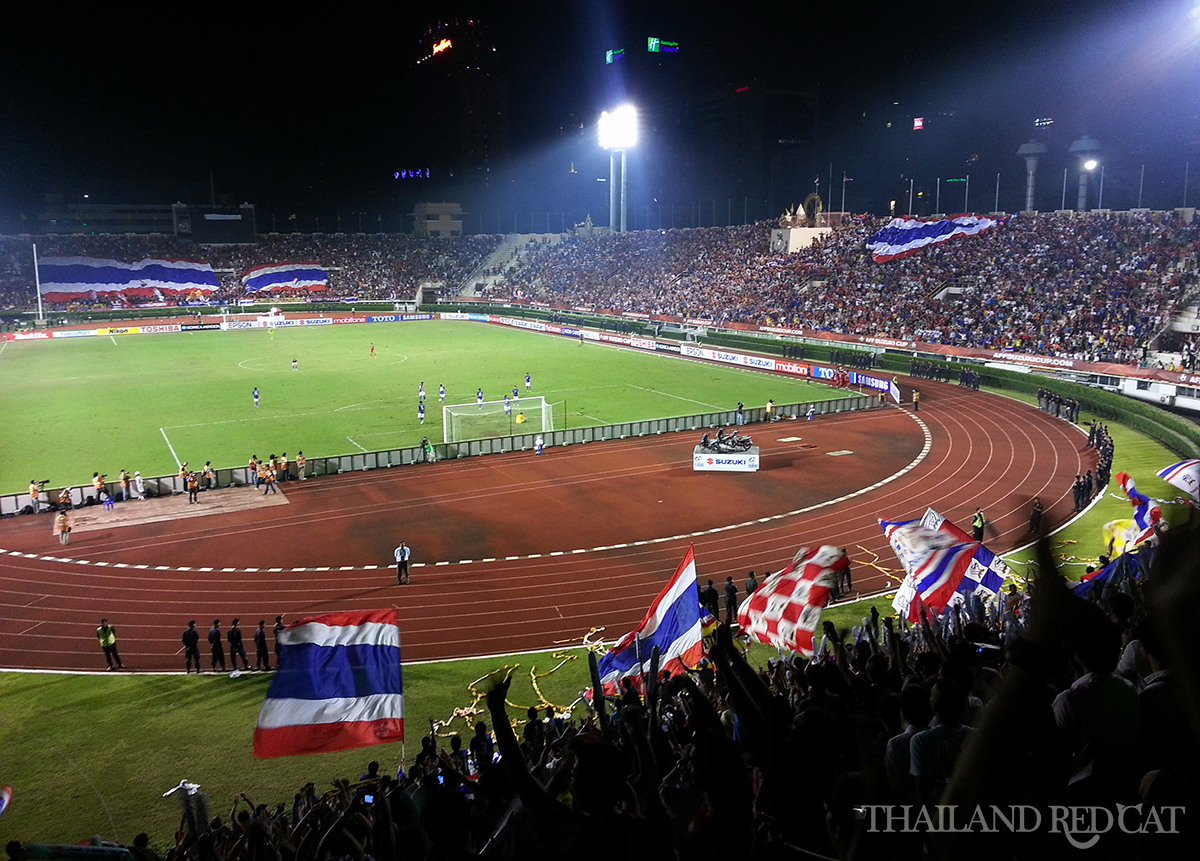 Even though the least frequently used of these stadiums, the Supachalasai National Stadium in Siam is the most easily accessible one. I watched two matches there so far, first the semi final of the Suzuki Cup (Southeast Asia Cup) between Thailand and Malaysia (3:1) and then the final 10 days later between Thailand and Singapore (1:0).

Unfortunately Singapore won the cup due to the first match of the final (3:1 in Singapore). Nevertheless, the Thai fans pushed their team from the first to the last minute and I could have never imagined such a great atmosphere in a stadium that holds about 20,000 people. Great experiences.

So to get there, simply take the BTS Skytrain to National Stadium station (last stop on the Silom Line). From there walk about 200 meters down the street (same direction the train was going) and the stadium is on your left. Just follow the crowd. 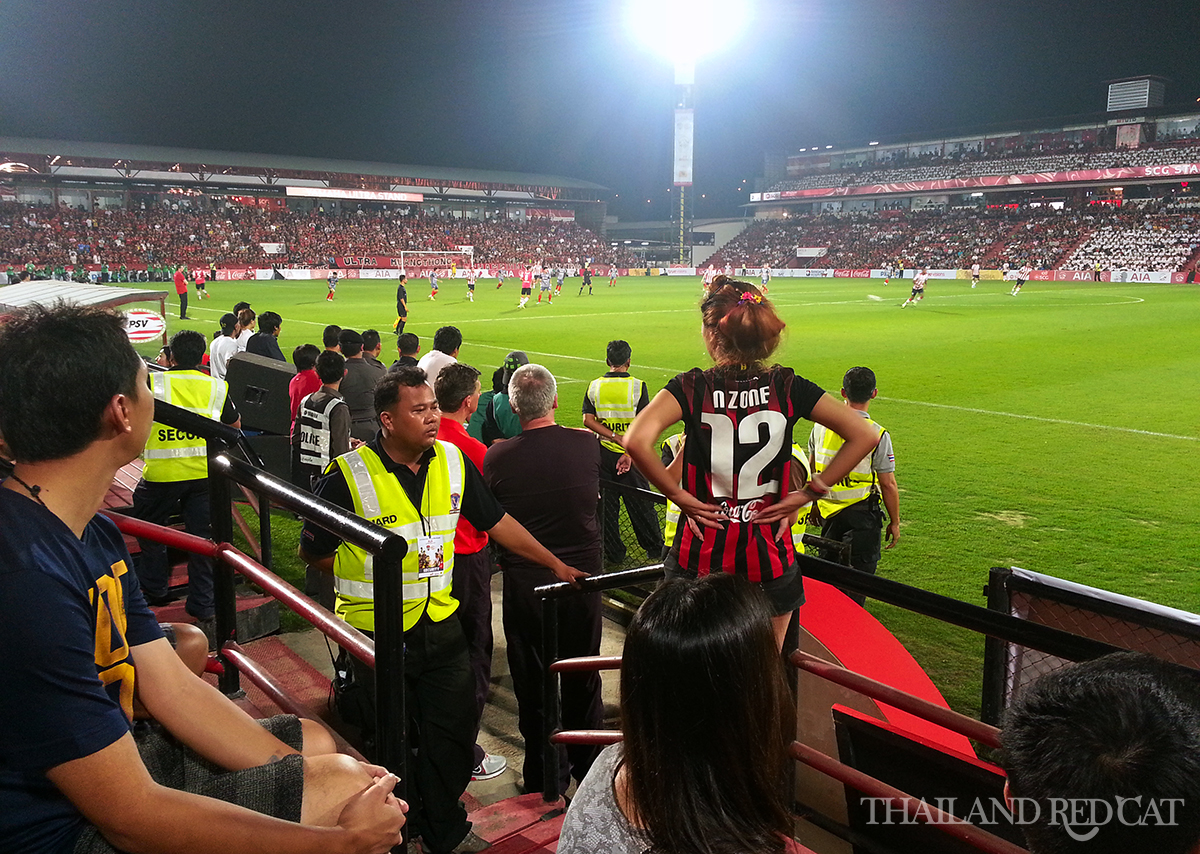 Even though it’s quite remote from the city center, this is the only “real” football stadium in Bangkok. The fans sit right behind the pitch and can experience the match from extremely close, similar to the famous football stadiums in England.

I came there first to watch a friendly match between Muangthong United and PSV Eindhoven. My ticket was 300 Baht and I sat right next to the tunnel where the players walked in, about 5 meters distance to the pitch. Just like all other football matches I watched in Bangkok, great atmosphere and one side note: The girls that sell the beer are super hot. It’s almost impossible to resist the temptation and you just have to get one (the beer I mean, 100 Baht).

Now to the bigger issue – how to get there? The SCG Stadium is located about 30km from Sukhumvit Bangkok and the cheapest way to get there is to take the bus no. 166 from Victory Monument, which takes you all the way to Muangthong Thani nearby the stadium (22 Baht). Alternatively, you can take the MRT to Chatuchak Park / BTS to Mo Chit and from there hop on a taxi that takes you to the stadium. Tell the driver “Sànaam Fútbɔɔn Mʉangthɔɔng” (สนามฟุตบอลเมืองทอง – Football Stadium Muangthong) and he should know. With a metered taxi it’s 140-160 Baht to the stadium. 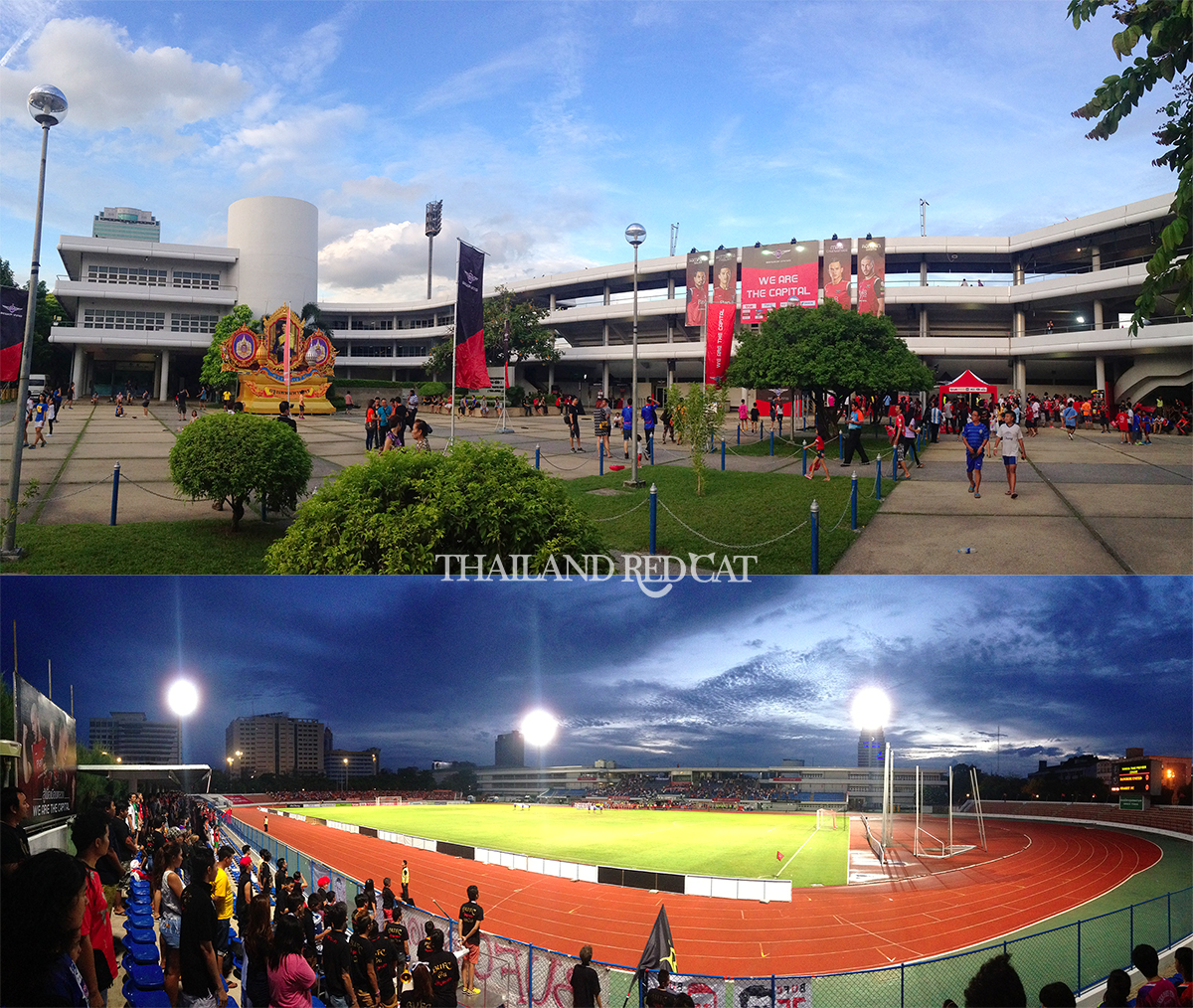 The Thai-Japanese Stadium is not just the playground of Bangkok United F.C. but also a very popular place for Bangkokians of all ages to do fitness. There’s a running track all around the stadium grounds, several tennis courts, another football pitch, a swimming pool, a squash hall and many fitness machines. The grounds are open daily from 6am to 10pm and the entrance is free!

I discovered the stadium rather by accident last Saturday while going there for working out for the first time when I figured there was a Thai League game between Bangkok United and Sisaket. I bought a ticket for 100 Baht right away and had a lot of fun watching the match! The capacity of this stadium is 10,320 seats. 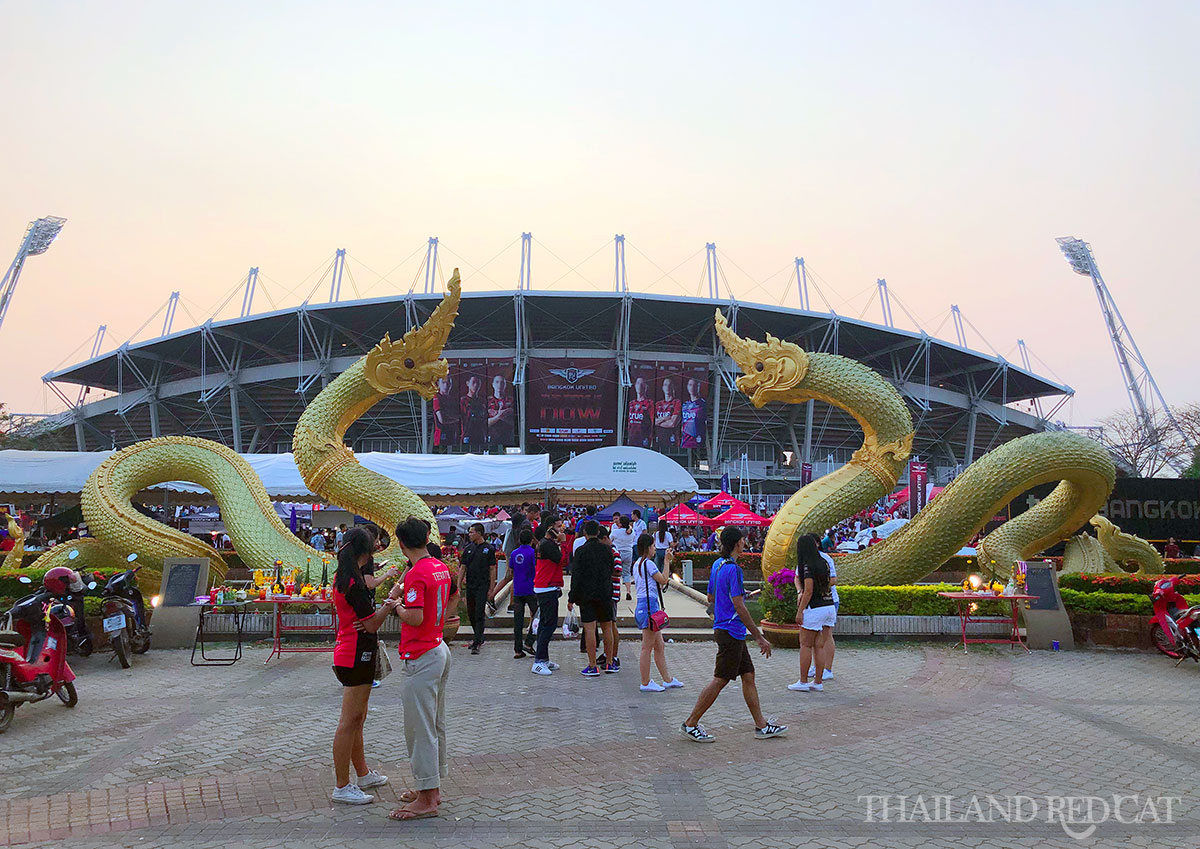 Beautiful, isn’t it? The new home ground of Bangkok United is the True Stadium on the campus of the Thammasat University in Rangsit. I went there yesterday to watch the big match between Bangkok and Buriram (0:1). This stadium has also more seats than their former playground in Din Daeng (25,000). The only downside is the running track around the pitch, so I think they will eventually build their own stadium, since they’ve got big sponsors like True, Huawei and CP.

The True Stadium is located about 40km north from downtown Bangkok, which is quite far. A taxi or Grab will cost you around 500 Baht including expressway fee. There are also minivans from Victory Monument going straight to Thammasat University about 800 meters from the stadium (37 Baht).

As you can see on my picture, it’s a multi-purpose stadium and one of the smallest too (capacity 20,000 seats), but the atmosphere is still great if you join the ultra fans. At least that’s what I did last week, I bought a ticket for the Buriram stand and there were just as many people as from the home team Army, singing and cheering nonstop.

Where to buy tickets for football matches in Bangkok?

Many Thai football matches, especially games of the national team, are sold out in advance. You can buy your ticket online on Thai Ticket Major or on the website of the home team. There is usually a 20 Baht booking fee involved for each ticket. Print out the receipt (or have it ready on your phone) and go to the 7-Eleven – after paying they’ll give you the confirmation paper that allows you to pick up the ticket on the match day at the stadium (recommended one hour before kick off).

Even if you want to watch a normal Thai League match, it might be hard to get a ticket by just showing up ten minutes before kick off, so just book it online to be on the safe side.

The ticket price for Thai football matches are usually between 100 and 500 Baht, depending on the seat location.

More posts about football in Thailand: