How I Got Fluent in Thai in One Year

I have stayed in Thailand for one year today! Of course I came here many times before just for traveling, but the last year has been totally different as I’ve been living in Bangkok all the time so I could really experience the local life here and yes I even managed to study Thai and get fluent in it written and spoken.

I’m not saying that my Thai is perfect now, but a normal conversation is no problem anymore. I can basically go to some random local Thai on the street and start talking with him or her about life. Or order a pork noodle soup with my preferred noodle type at a street restaurant. Or ask out a local uni girl for dinner.

In this post I’m going to tell you how I did it and maybe it also gives you some inspiration to start learning Thai as well since:

Learning the Thai language is not easy, but it’s also not as difficult as most foreigners think.

I think many foreigners (especially guys) that live in Thailand for years fail to learn Thai because there are so many fun things going on all the time that they are tempted to just enjoy themselves rather than staying in their room and learning vocabulary on a daily basis for several months.

Thai has five tones (in comparison Chinese has four) and if you don’t get them right people just won’t get what you want to say. It took me about six to seven months of studying until I could handle the tones without problems anymore. The most trouble I had with the high tone that I still find is quite similar to the rising tone but it’s just about listening and repeating.

Oh yeah, listening. You really have to have your ear open all the time, in the metro, at work even try to catch what the girls are saying in the 7-Eleven (however sometimes they speak in their Isaan dialect which is almost a whole different language).

Coming back to the most challenging things about learning Thai, I think there are only two things that are difficult to learn during the first months:

The grammar is basically pretty easy or better to say there isn’t much about the grammar at all since verbs are not conjugated, not for singular or plural people and not for different tenses. You know for example if something happened in the past by just adding the word for yesterday or last week in the sentence. Even if you don’t add it people would normally get it from the context. Or you add the world lɛ́ɛo (แล้ว – already) that Thais just love to use in every other sentence to talk about things that have happened already or things they have done already.

Actually the first three months I didn’t study any Thai at all. But from the point that I knew that I’m gonna do a second internship and thus stay in Thailand for one year (at least) I thought it’s just a good idea to do so. I didn’t want to go back home after such a long time and only be able to speak a few phrases that most backpackers learn during their three week trip around the country. I thought it’s the most important tool to really understand how Thai people think and what their culture and habits are all about. Anyway:

How did I learn Thai and become fluent in one year?

Not just foreigners but also Thais often ask me why my Thai is so good as I have just stayed here for one year (and only studied for 9 months). And how I have learned it. Now first and most important:

I didn’t sign up for a language school but bought books and studied all by myself.

I think you don’t need to spend a lot of money to learn Thai and pay for expensive classes that you are too lazy to join after a couple of weeks.

I think I was lucky to just have picked a really good book called “Thai for Beginners” by Benjawan Poomsan Becker and it just turned out to be the perfect learning tool. Very well structured with 10 lessons, each with vocabulary, sentences, grammar and exercises. It also teaches how to read and write Thai in a very systematic way. I’m really happy that I picked that book. I did one lesson each week – and could also feel my progress in Thai significantly after every week, after each lesson.

It turned out that the beginners book has two follow up editions: “Thai for Intermediate Learners” (10 lessons as well) and “Thai for Advanced Readers” (with longer texts on all different kinds of topics even the national Anthem, newspaper articles, Thai songs and proverbs). Each edition can be purchased with 2 CD’s and I found it very useful to listen to the texts provided in the book.

Of course I just didn’t learn only with these books alone in my room. I always had them in my bag and tried to apply the things being taught with people I met during the day (mainly girls).

In addition to that I also got myself this book for school-children to practice writing the Thai alphabet crisp and clear from the beginning: 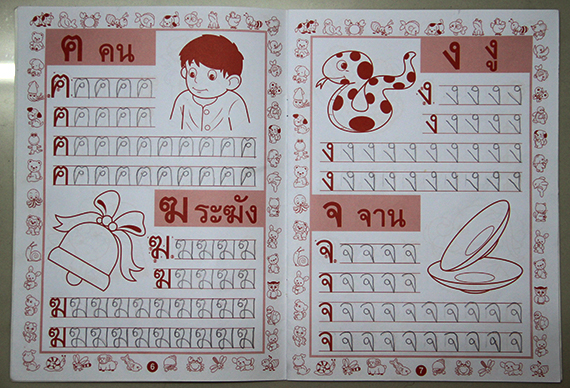 I had my notebook where I wrote down passages of the text from the books. You can see how my writing got better and nicer to look at over the months. The trick is to write large letters when you start and when you got that right to get smaller – which is more difficult. 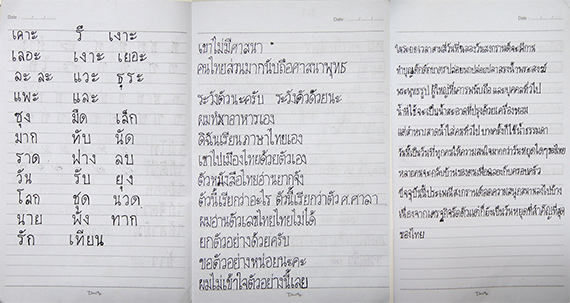 The good thing about learning Thai is even though you struggle quite a lot getting all the tones right during the first months the local people always encourage you learning and speaking.

However, they don’t always correct you and help you pronouncing a word the right way and that’s why after four months of studying I decided to get a private tutor to basically practice listening and speaking and to make sure she corrects me and helps me improving my pronunciation. I found her contact through the Craigslist Thailand website where she posted about her Thai freelance teaching. 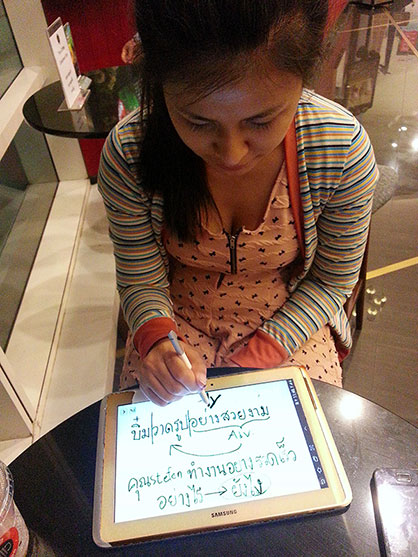 Her name is Bim and we met once a week in a cafe of a shopping mall for 2 hours, I paid her cash after each session. Besides practicing communication she also taught me lots of other useful phrases and grammar structures that were not included in my books. Sometimes she also noticed words in the vocabulary section that were outdated and taught me the right words instead. I took her lessons for about 10 weeks and it was a great addition to learning just from my books.

If you are interested in taking lessons with Bim write her a message through her facebook page. 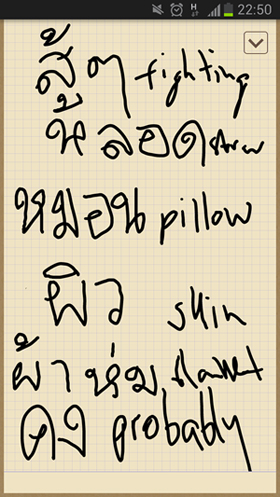 From the time I was more or less done with my books and stopped taking tutor classes I just started writing down words that I didn’t know on my mobile phone. I use my smart phone to save these kind of notes on my home screen so memorizing the words is pretty easy as I look at them several times a day.

Once I feel confident with a word I just replace it with a new one.

Of course as I said even though I’m confident starting any kind of conversation in Thai by now there’s still a lot of words and phrases to learn. So I’m gonna continue writing down new words on my phone and just keep going. It’s always a cool feeling when I speak to Thais in Thai and they are surprised about that – because when Thais see a Farang they never expect him or her to speak Thai, not even mentioning being able to read and write as well.

Another thing that would be really interesting I might even start learning the Isaan language. But let’s see, that’s way too far down the road. I can now speak Thai and that’s cool.