Where to go for Loi Krathong in Bangkok

One thing that’s nice about living here in Thailand is that there are so many festivals and while the Thais even celebrate the western events like New Year’s Eve, Valentines Day and just last week Halloween more for having an excuse to go out drinking rather than really understanding what’s behind it, there are also countless of typical Thai style festivals – and the Loi Krathong Day is one of the most famous ones.

It is celebrated on the evening of the full moon night of the 12th month in the traditional Thai lunar calendar, a time of the year which is known as a great flood season and usually falls in early November, like yesterday Thursday the 6th of November.

If you do a quick Google image search for the term Loi Krathong, you will find 80% of the pics are looking similar to this: 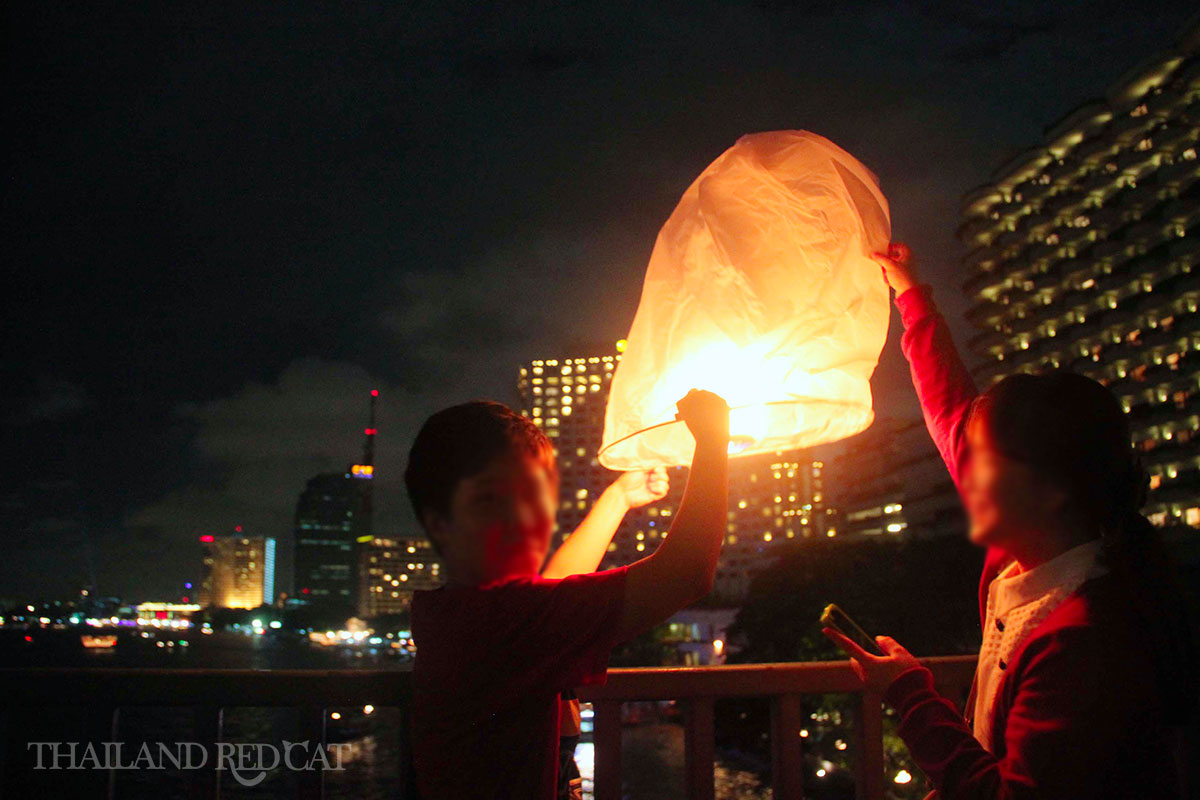 These sky lanterns called Khom Loi (โคมลอย) are actually part of the northern Thai Lanna Yi Peng festival which is celebrated on the same day, still this is what most foreigners (wrongly) associate with the Loi Krathong Festival.

The main activity of the event actually looks like this: 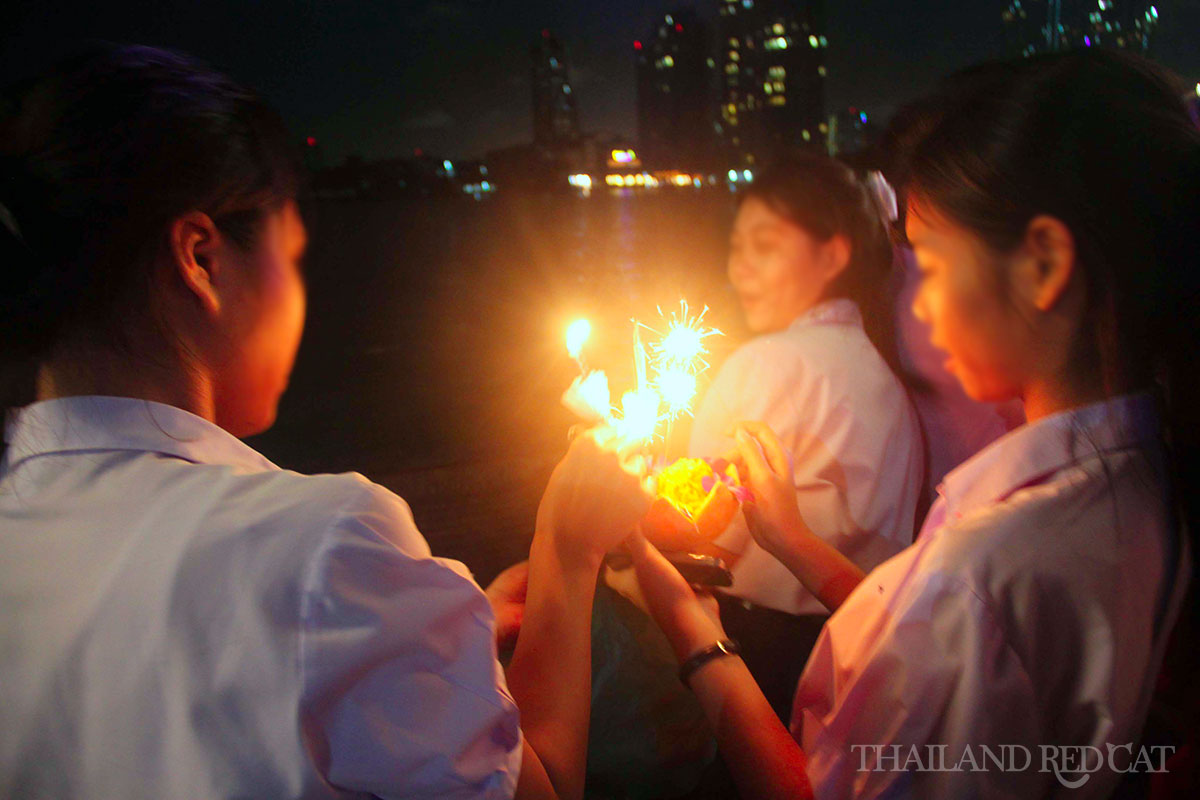 What these students on the picture are doing is called “Loi Krathong” – yes that’s right, just like the name of the festival itself.

What’s the purpose of floating the Krathong?

Besides both thanking the goddess of water, Phra Mae Khongkha, for a steady supply of water as well as asking her for forgiveness for polluting it and worshiping the foot-print of the Buddha on the Nammathanati River beach in India, which I’m unsure the younger generation of Thais is even aware of, the two main reasons for the millions of people going out with their beloved ones and releasing the Krathongs into the rivers, lakes and ponds throughout Thailand are:

Thai people believe that if the candle doesn’t go out while releasing the Krathong into the water, then the wish will come true. Some people also put strands of hair, nail clippings, bits of clothes or a one Baht coin in their Krathong to emphasize their worship.

What is the Best Place for Loi Krathong in Bangkok?

The best place to “do it” in Bangkok is of course the Chao Phraya River. You can take the BTS Skytrain right to the pier at Saphan Taksin Station (see the map below). Just one tip if the festival is on a weekday like yesterday: Don’t make your way out there later than 6pm. I finished work early at 5pm just to make sure I can catch a train with my girlfriend before the big crowds come out at rush hour (the traffic jams and queues at the metro stations are at its worst at around 6:30pm).

We took a non stop return trip from Sathorn Pier (right next to Saphan Taksin BTS Station) all the way up the river to Wat Arun (80 Baht per person, seating for everyone) and it was really beautiful watching all the colorful and decorated boats as well as massive fireworks right on the river. Once arrived at Wat Arun, they gave us all some time for releasing our boats into the river, before slowly cruising back to Sathorn Pier.

Even though the 45 minute boat trip was a lot of fun, the one hour traveling to the pier and back to downtown was rather stressful, here’s a video I took of the crowds at Sathorn Pier at 8pm – again that’s why I recommend you to show up there not too late:

How much does a Krathong cost?

There are vendors selling these Krathongs simply everywhere, but especially near the river where they put up their booths right next to the fried chicken and fresh orange juice vendors. They’re quite cheap actually, starting from 50 Baht for the small and basic baskets. For 120 Baht you can get a fairly big and impressive one. Well it’s simple: The more you pay, the bigger your Krathong.

I hope you have a good overview of the festival now, what’s behind it and with all that said: 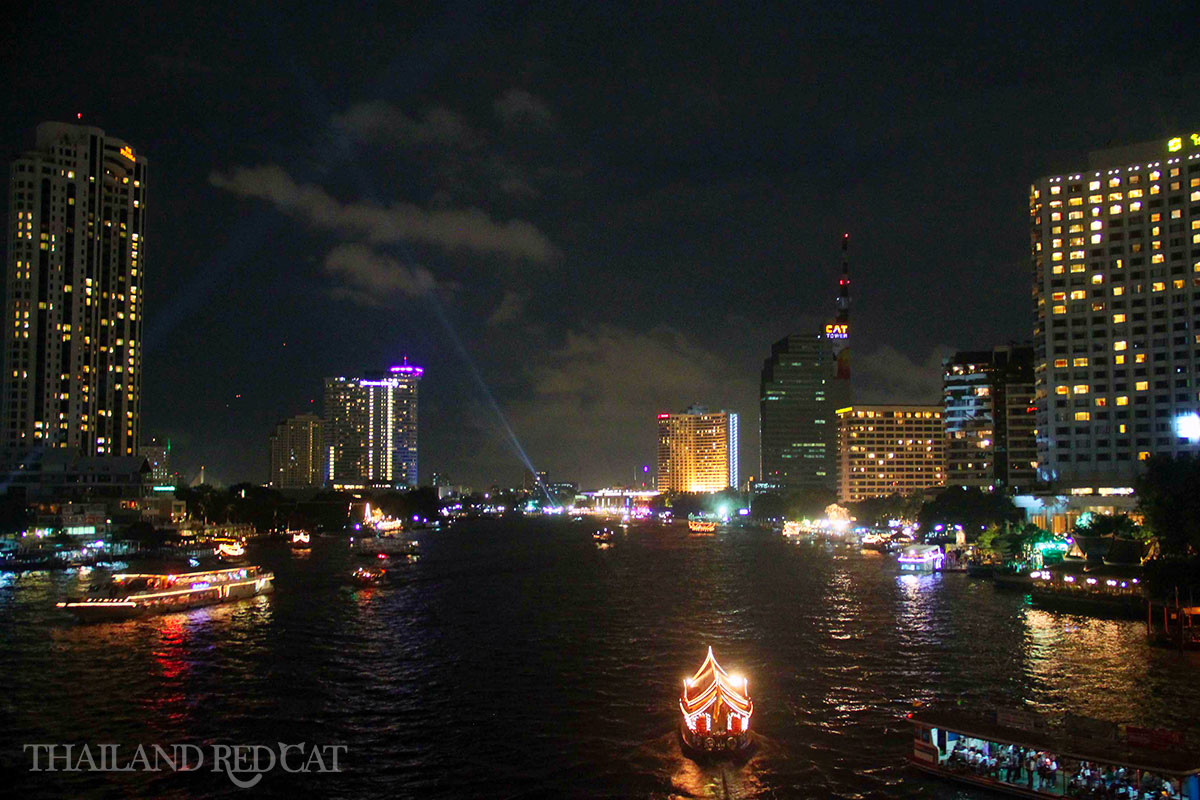