How to get from Bangkok to Hat Yai

For some only a quick overnight stop on their way to Malaysia and for others a popular trip destination because of its bustling nightlife scene, Hat Yai is the capital of the Songkhla province and the most famous yet least touristic major city in the deep south of Thailand. Below are the different traveling options from Bangkok to Hat Yai and vice versa.

Bangkok to Hat Yai by Bus

There are services about every two hours throughout the day and also night buses that have blanket and pillow included in the ticket price. The one way fare is between 690 Baht and 1,070 Baht, depending on the type of coach like 2nd class aircon to VIP with extra large seats (three seats in one row).

The trip takes 12 to 13 hours and the bus terminal in Hat Yai is located about 2km southeast of the town center (Thamanoonvithee Road where most of the hotels, bars and shopping malls can be found). A motorbike taxi will take you there for 40 Baht one way.

Bangkok to Hat Yai by Minivan

Traveling by minivan is the quicker alternative to the bus travel, however it’s not a very comfortable ride unless you got a nice seat in front or right behind the driver that has more legroom. Also, you can only bring a medium sized bag, so if you are traveling with a 20kg heavy suitcase this would not work or you will have to book a second seat, however then I would rather recommend you to take a flight.

In Hat Yai, ask your hotel reception for booking a minibus (hotel pick up is always included), there are usually two departures a day, one at around 8 or 9 o’clock in the morning and the other in the late afternoon at around 4pm. You can also walk to the minibus stop near Lee Garden Plaza and book your ticket there, but you may not save more than like 50 Baht for the agent’s commission.

I once traveled from Hat Yai to Bangkok by minivan and it was the most tiring trip I’ve done in Thailand so far. We had to stop twice for refilling petrol, the first time it took 45 minutes and the second time almost two hours. Then also a lot of traffic jams so the whole trip took 16 hours instead of 12 hours. I left Hat Yai at 8 o’clock in the morning and reached Mo Chit in Bangkok at midnight.

Bangkok to Hat Yai by Train 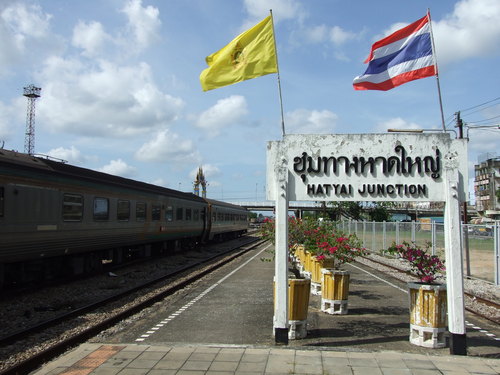 There are 5 daily trains from Hua Lamphong Bangkok to Hat Yai Railway Station and vice versa, all of them are overnight trains. The trip takes you through Hua Hin, Chumphon and Surat Thani, so if you change your mind you can always hop off at one of these attractive destinations.

Below are the time tables for the train services:

Bangkok to Hat Yai by Flight

There are three airlines operating more than two dozen daily flights from Bangkok to Hat Yai and vice versa: AirAsia, NokAir (both from Don Mueang, Bangkok) and Thai Airways (from Suvarnabhumi). There are pretty good promotions throughout the year with one way fares from as low as 800 Baht. The more common promotion fare however is around 1,300 Baht, with Thai Airways being slightly more expensive since its not a low cost carrier, rates start from 1,800 Baht.

The flight time is just about 90 minutes. The airport in Hat Yai is located about 15km southwest of the city center. Taxis charge 250 Baht for the transfer to downtown and there are also VIP limo services available for 300 Baht. Cheaper options are minivan services for 100 Baht and blue colored songthaews for 30 Baht (located at the far end of the parking lot).

Map of Transport in Hat Yai